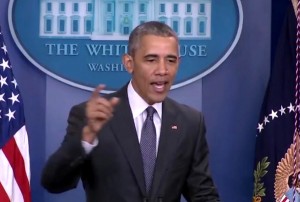 Hillary Clinton and/or Bernie Sanders got a look at their secret weapon Tuesday morning when President Obama turned a routine canned statement on the economy into a press conference that lasted just long enough to allow him to demolish Republican presidential contenders Ted Cruz and Donald Trump from the podium. The statement was added to the press schedule at the last minute Tuesday morning, and was pegged to the Treasury Department’s efforts at curbing corporate inversions, but after his remarks, Obama stuck around to take questions. The first was about the Panama Papers, so he took a second question, and hit paydirt.

The question was about Donald Trump’s new plan to pay for a border wall by freezing remittances to Mexico from people in the US, but the President took the opportunity to blast both of the leading GOP contenders:

I’ve been clear earlier that I’m getting questions constantly from foreign leaders about some of the wackier suggestions that are being made. I do have to emphasize that it’s not just Mr. Trump’s proposals. You’re hearing concerns about Mr. Cruz’s proposals, which, in some ways, are just as draconian when it comes to immigration, for example. The implications with respect to ending remittances, many of which are from legal immigrants and from individuals sending money back home to their families, are enormous. First of all, they’re impractical. We just talked about the difficulties of trying to enforce huge outflows of capital. The notion we’re going to track every Western Union bit of money that’s being sent to Mexico, good luck with that. Then we’ve got the issue of the implications for the Mexican economy, which in turn, if it’s collapsing, sends more immigrants north because they can’t find jobs back in Mexico. But this is one more example of something that is not thought through, and is primarily put forward for political consumption. And as I try to emphasize throughout, we’ve got serious problems here. We’ve got big issues around the world. People expect the president of the United States and the elected officials to treat these problems seriously and put forward policies that have been examined, analyzed, are effective, where unintended consequences are taken into account, and not half-baked notions out of the White House. We can’t afford that.

The President rarely makes an appearance in the Brady Briefing Room, and when he does, usually doesn’t take questions. The fact that he made a point of taking questions here, and stopped taking questions after he got the one he wanted, is a preview of things to come for the eventual Republican nominee. Whomever ends up the GOP standard-bearer will have to contend with a fired-up President Obama with a bully pulpit and no (ahem) damns left to give, and the Democratic nominee will be the beneficiary of same.