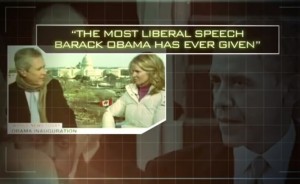 The reviews are in, and the political media, right, left, and center, all agree that President Obama‘s Second Quadrennial Inaugural Address (or as I like to call it, the “22nd Amendment Era”) was the most liberal inaugural address evah!!! Not only that, it’s the President’s most liberal speech ever, period, full stop, literally. To hear them tell it, President Obama dropped brown acid, played The Star Spangled Banner on an electric tambourine, and led an orgy on the steps of the U.S. Capitol. I was going to put together a montage of this collective media insanity, but thankfully, the media critics over at Karl Rove‘s Crossroads GPS beat me to it:

It’s great to see Karl Rove keeping busy, and even greater to hear that conservatives are now willing to trust the mainstream media, and will immediately shut down Newsbusters. Unfortunately, they all got it wrong this time. Yes, the President’s speech was “liberal” if you compare it with other inaugural addresses, and with the current Republican Party as your baseline, but the things he actually talked about are as American as Deconstructed Apple Pie.

Granted, President Obama’s reference to the Stonewall Uprising took me aback somewhat, but that’s because I’m 45 years old, and until now, the gayest thing I’d ever heard in a presidential speech was “The surge is working!”

The fact is, most Americans support marriage equality, and President Obama, as conservatives love to remind us, was greeted at his coming out party by a lounging Dick Cheney. On issue after issue that President Obama talked about during Monday’s address, huge majorities of the country are with him. Sure, I could Google up some polls on Social Security, Medicare, Medicaid, the wars in Iraq and Afghanistan, equal pay, or even on things he didn’t mention, like abortion, but we already took a pretty important poll on November 6, and as Karl Rove can hopefully now tell you, the country expressed itself quite clearly.

President Obama’s extended riff on climate change was new, and wasn’t something that he campaigned heavily on, but as the progressive watchdogs at the Mitt Romney* campaign noted, that’s about as “liberal” as Newt Gingrich. And what commie pinko path did the President propose?

“The path towards sustainable energy sources will be long and sometimes difficult. But America cannot resist this transition; we must lead it. We cannot cede to other nations the technology that will power new jobs and new industries – we must claim its promise.”

So, now, it’s “liberal” to grab up all the money? Why does the mainstream media hate capitalism?

Aside from the Stonewall reference, the only thing that was mildly surprising was that the President made scant reference to the tragedy in Newtown, and no reference at all to the sensible gun regulations that huge majorities of Americans support, which he will do in his State Of The Union speech.

If there is a lesson for the mainstream media to learn from the President’s second inaugural address, it’s that he is no longer letting the kiddie table control the conversation in America. They’ve apparently missed that memo, so consider this their bcc.