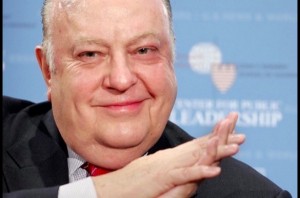 The hits just keep coming for embattled former Fox News Chairman and CEO Roger Ailes, whose reprehensible conduct is being further detailed in a lawsuit by Andrea Tantaros. According to the lawsuit, Ailes not only harassed Tantaros, he also revealed some pretty disgusting attitudes about other Fox News personalities, including some who defended him when these sexual harassment allegations first surfaced.

According to the suit, Ailes called Kimberly Guilfoyle a “Puerto Rican whore,” said that Harris Faulkner “has the tendency to look like the angry black woman,” and repeatedly quizzed Tantaros about the sexual proclivities of Guilfoyle, Greg Gutfeld, Dana Perino, and Eric Bolling.

Here’s what the suit says about a meeting between Ailes and Tantaros on or about August 12, 2014:

c.Perhaps Gutfeld and Perino are “sleeping together?”;

g.Referring to Monica Crowley: “If I ever had to go on a date with her, I’d jump out the window.”;

i.Referring to Catherine Herridge: “She’s a stalker.”; and

j. Referring to Maria Bartiromo: “She got so fat.”

Then, in December, the suit alleges Ailes covered much of the same ground in another meeting in his office to test whether Tantaros had become any more receptive to his advances:

c.“Perhaps Gutfeld and Perino are “sleeping together?”;

e.Perino “is uptight. You get the feeling that she never lets her hair down, but if she did, she’d be a good time.”

g.“Harris [Faulkner] has to be careful. She has the tendency to look like the angry black woman.”;

You can read the full Tantaros complaint below, via Scibd: