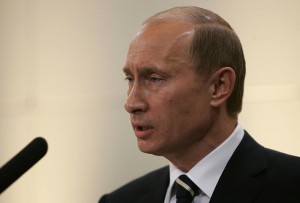 Russian President Vladimir Putin took his case against striking Syria directly to the American people in an op-ed for The New York Times. Putin warns that if the United States strikes Syria, it will boost terrorism in the region and cause more violence.

Putin cites the fact that the U.S. was planning to take action without the consent of the United Nations (though that’s partly due to Russia having veto power on the U.N. Security Council).

No one wants the United Nations to suffer the fate of the League of Nations, which collapsed because it lacked real leverage. This is possible if influential countries bypass the United Nations and take military action without Security Council authorization.

The potential strike by the United States against Syria, despite strong opposition from many countries and major political and religious leaders, including the pope, will result in more innocent victims and escalation, potentially spreading the conflict far beyond Syria’s borders. A strike would increase violence and unleash a new wave of terrorism. It could undermine multilateral efforts to resolve the Iranian nuclear problem and the Israeli-Palestinian conflict and further destabilize the Middle East and North Africa. It could throw the entire system of international law and order out of balance.

Putin touts how much Russia has done to help “develop a compromise plan” for Syria, and even claims that the chemical weapons attack was initiated by rebel groups and not by the Assad government.

No one doubts that poison gas was used in Syria. But there is every reason to believe it was used not by the Syrian Army, but by opposition forces, to provoke intervention by their powerful foreign patrons, who would be siding with the fundamentalists. Reports that militants are preparing another attack — this time against Israel — cannot be ignored.

Putin took the opportunity to pitch the new plan for the Syrian government to hand over its chemical arsenal, and got in a dig at President Obama‘s big primetime address on the matter.

My working and personal relationship with President Obama is marked by growing trust. I appreciate this. I carefully studied his address to the nation on Tuesday. And I would rather disagree with a case he made on American exceptionalism, stating that the United States’ policy is “what makes America different. It’s what makes us exceptional.” It is extremely dangerous to encourage people to see themselves as exceptional, whatever the motivation. There are big countries and small countries, rich and poor, those with long democratic traditions and those still finding their way to democracy. Their policies differ, too. We are all different, but when we ask for the Lord’s blessings, we must not forget that God created us equal.