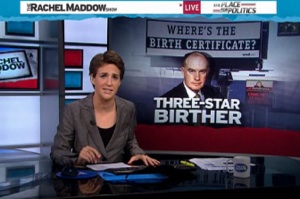 Last night Rachel Maddow turned her attention to a story that she had previously been “gleefully ignoring.” Terence Lakin is an army doctor who refused to deploy to Afghanistan because, as Maddow reports, he “thinks President Obama “is secretly foreign and therefore secretly not really president.” But the story has earned Maddow’s attention because a retired three- star general retired three-star Air Force general named Lt. General Thomas McInerney has now filed an affidavit in support of Lakin. Oh, and McInerney often appears on Fox News. So there’s that.

Maddow sums up (transcript from MSNBC.com):

Gen. McInerney argues that, “In refusing to obey orders as to doubts as to their legality, Lt. Col. Lakin has acted exactly as proper training dictates. He’s demonstrating the courage of his convictions and his bravery.” The general has referred to the concerns of the birthers as, quote, “serious and widely held.” He says investigating them is, quote, “absolutely essential to reassuring all military personnel, once and for all, for this president whether his service as commander-in-chief is constitutionally proper.” Now, somebody having crazy ideas about Barack Obama being secretly foreign is not news.

In the even that the anyone takes the General words too seriously, Maddow then lists other examples of what she sees as Lt. Gen. McInerney’s crazy ideas, namely:

–He suggested that the alleged WMD that lead to the Iraq war and never found were “spirited away” just prior to the US invasion by Russia, China and France.

–He suggested the reason why the U.S. had not seen terrorist attacks on American soil since 9/11 by asking “Why attack here when you have leftists in America who have aided and abetted the enemy more than Tokyo Rose did in World War II?”

–He suggested that to prevent another terrorist attack on an American airline the following “If you are an 18 to 28-year-old Muslim man, you should be strip-searched.”

Yes, the retired Lt. Gen made the following suggestions, and if you are a regular viewer of Rachel Maddow, that is rather stunning evidence of the implied crazy of McInerney. However, there are probably just as many people who don’t watch Maddow that likely see those as examples as smart and reasonable approaches to stop terrorism. Maddow sums up the segment:

Ultimately, the story here is not that somebody’s trying to get out of the army because of some crazy birther conspiracy theory. Ultimately, the story here is not even that a three- star general has joined the quixotic request. The real story, it seems to me, is that a guy this nuts gets paid to comment on foreign policy and wars. The birther general is on FOX News’ payroll. He’s the go-to guy for high-minded reporting on Muslim strip- searching, French people stealing WMDs, assurances of how easy it would be to wage war on Iran, and now, maybe the president’s birth certificate, too. He is their guy. We report, you freak out. ”