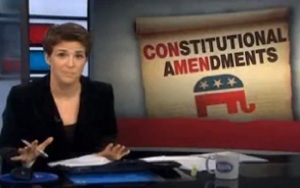 Prime time cable news programming is typically filled with trite and banal commentary; and as we can see in the following clip, even one of the most respected of the lot can be guilty of cliched platitudes. But sometimes even the most banal analysis still needs saying. Case in point? Rachel Maddow‘s pointing out last night that much of the rhetoric surrounding the repeal of the 14th amendment which asserts birthright citizenship for children of illegal immigrants is just a cynical “wedge issue” designed to drum up support in advance of the mid-term elections.

In the event you’ve been on vacation for the last couple of weeks, there has been increased discussion on many cable news programs about the plight of “Anchor Babies” – the apparent scourge of the current U.S. immigration problems in which illegal immigrants come to America to have a baby, which in turn leads to a much greater chance for them to become a U.S. citizen.

As Maddow points out in the following clip, amending the constitution is really, really hard. So difficult, in fact, that none of us should take this political rhetoric very seriously (in terms of actually changing law.) And in her words, hearing a politician state constitutional amendments as a goal, is akin to hearing a child claim that they will get better at math, not by doing their homework, but by donning a super-hero costume.