Rahm Emanuel: Rep. Jesse Jackson Jr. Shouldn’t Rush To Get Back To ‘Congress That Does No Work’ 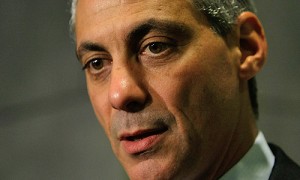 Earlier this week, Rep. Jesse Jackson, Jr.‘s office explained the Illinois congressman’s extended absence from Capitol Hill by informing us that he’s undergoing treatment for a “mood disorder” at an undisclosed location. Chicago Mayor Rahm Emanuel commented on the situation, noting that there’s no rush for Jackson to get back “to work at a Congress that does no work.”

Speaking at Hyde Park Career Academy, Emanuel said, “‘I know a lot of people are saying, ‘When is he going to get back to work?'” But, he asked, what’s the rush? It’s not like he’s missing anything. Per the Chicago Sun-Times:

“Why should he get back to work to a Congress that does no work?” Emanuel said to laughter. “Why rush it? Last time I checked, Congress had their second repeal of the health care bill. Why rush? Take care of your health. Guess what: Congress is going to be there. Hopefully when you return they’ll be doing real work.”

The Sun-Times went on to note that the questions surrounding Jackson’s leave have largely been about why he hasn’t been more communicative about the matter. To that point, Emanuel said, “Everybody has an obligation [to disclose]. I want to be clear, though. Just because you’re in public life doesn’t mean your zone of privacy ends. At some point, he has to talk to the constituency, and he knows that but —” (At that point, he was cut off by another question, leaving the sentence unfinished.)

On Wednesday, Jackson’s office released a statement that said, “The Congressman is receiving intensive medical treatment at a residential treatment facility for a mood disorder. He is responding positively to treatment.” It went on to dispel rumors that he’s been undergoing treatment for any drug or alcohol problems. The term “mood disorder” is wide-ranging, which has left some wondering what exactly it means.