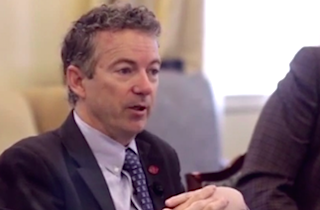 With his early entrance into the 2016 presidential race this week, Sen. Ted Cruz (R-TX) made a big bid to capture the country’s evangelical vote. Sen. Rand Paul (R-KY) tends not be mentioned on the list of potential candidates that could carry the Christian right (compared to, say, Mike Huckabee) — but now he is making a play of his own.

On Thursday morning, Paul appeared at the Capitol Hill Club in Washington, D.C., for a small prayer breakfast, where he spoke about “religious freedom, the church & U.S.-Israel relations, faith & public life, and the essential role the church plays in the U.S. Government” according to the Christian Broadcast Network’s David Brody.

In a clip posted to that organization’s website, Paul talked about the limits of the federal government’s power when it comes to issues that religious groups care about most. “Don’t always look to Washington to solve anything,” he said. “In fact, the moral crisis we have in our country, there is a role for us trying to figure out things like marriage, there’s also a moral crisis that allows people to think that there would be some sort of other marriage.”

“We need a revival in the country,” the senator added. “We need another Great Awakening with tent revivals of thousands of people saying reform or see what’s going to happen if we don’t reform.”

In his coverage, Brody was insistent that Paul is “going to get a chunk of the evangelical vote.” He wrote, “On the surface, he may not be the guy you might think would appeal to evangelicals but take a deeper look. He’ll have a pretty good appeal to millennial evangelicals and his talk of spiritual revival resonates.”

“While he’s not going to wear his faith on his sleeve as much as some of the other candidates, his heart seems to be in the right place,” Brody concluded.