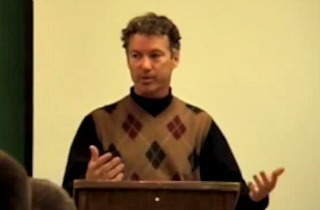 David Corn, of the team of video-unearthing sleuths at Mother Jones, unearthed video Monday of Senator Rand Paul (R-KY) claiming in 2009 that former Vice President Dick Cheney had plunged the U.S. into the Iraq War so as to benefit Halliburton, of which he had been CEO — an early salvo in the current GOP intraparty skirmish over foreign policy.

While speaking to students at Western Kentucky University shortly before he announced his bid for Senate, Paul pivoted from a discussion of the budget onto America’s misadventure in Iraq:

There’s a great YouTube of Dick Cheney in 1995 defending [President] Bush Number One [and the decision not to invade Baghdad in the first Gulf war], and he goes on for about five minutes. He’s being interviewed, I think, by the American Enterprise Institute, and and he says it would be a disaster, it would be vastly expensive, it’d be civil war, we would have no exit strategy. He goes on and on for five minutes. Dick Cheney saying it would be a bad idea. And that’s why the first Bush didn’t go into Baghdad. Dick Cheney then goes to work for Halliburton. Makes hundreds of millions of dollars, their CEO. Next thing you know, he’s back in government and it’s a good idea to go into Iraq.

[snip] When the Iraq war started, Halliburton got a billion-dollar no-bid contract. Some of the stuff has been so shoddy and so sloppy that our soldiers are over there dying in the shower from electrocution. I mean, it shouldn’t be sloppy work, it shouldn’t be bad procurement process. But it really shouldn’t be that these people are so powerful that they direct even policy.

Paul segued back from the foreign policy digression by advising the young Republicans to look beyond entitlement reform and consider cutting defense spending as a means of balancing the budget.

RELATED: Senator Offers to Waterboard Cheney to See If He Thinks It’s Torture

Paul’s non-interventionist views have provoked a Republican Party that pushes higher defense spending and more muscular foreign policy engagements, earning him the ire of fellow lawmakers like Senator John McCain (R-AZ) and Representative Peter King (R-NY). The Paul/Cheney feud in particular has been bubbling for years, with Cheney supporting Paul’s establishment challenger in his primary, and Paul in return pledging support to Senator Mike Enzi (R-WY) against Cheney’s daughter Liz during her aborted primary challenge.