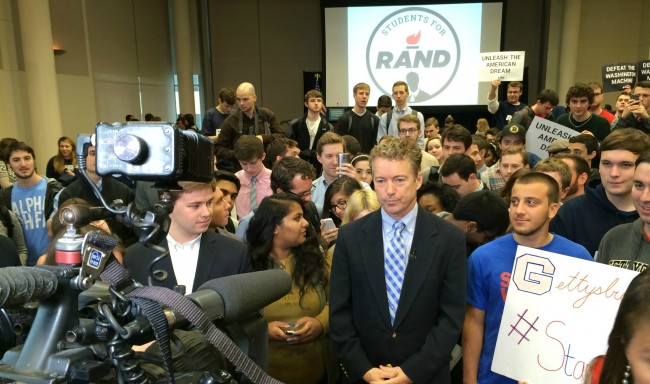 WASHINGTON, D.C. — Republicans have always enjoyed railing against the political media and its perceived liberal bias, and the party’s presidential candidates often jeer reporters in their stump speeches in order to energize their base of supporters who feel the same way about the mainstream press. Sen. Rand Paul (R-KY) takes a slightly different approach, saying he simply won’t talk to dishonest reporters and those who double as columnists.

“We talk to most reporters and we try to get our message out,” Paul told Mediaite in an interview Thursday before the GOP presidential candidate spoke to an energized crowd of around 400 students at The George Washington University.

Paul appears regularly on cable TV programs and radio talk shows, and often makes himself available to print reporters before and after campaign events. At the same time, he knows which journalists to avoid altogether.

“I think there’s always been people who have an agenda, and we all know them and meet them, and they are reporters who basically aren’t objective,” Paul said. “But there are some good people in the media business as well. I’ll bet you there are 20 different people I’ve interviewed with on television that I cannot tell you whether they are a Republican or a Democrat.”

According to Paul’s communications director, Sergio Gor, those in the media who give the libertarian senator a fair chance to explain his positions on the issues include Fox’s Bill Hemmer and Eric Bolling, and Wolf Blitzer and Jake Tapper of CNN — journalists who, Paul believes, ask tough questions but never sacrifice their fairness or objectivity.

“But I can give you a list of 100 [reporters] who I know are biased — in fact, we have many media personalities that came from previous Democrat or Republican White Houses,” Paul added. “They should be op-ed people, but they shouldn’t try to pretend they can be a reporter because nobody can believe that they are unbiased.”

Members of the media who write opinion columns but double as reporters are often excluded from press availabilities. According to Paul, they are “not real reporters.”

“You can write whatever you want about me. It’s a free world,” Paul said. “But if you’re writing nasty op-eds about a person, nobody’s going to want to talk to you. And I think really that is one fair way of trying to decide who you talk to.”

And while traditional media is still important, Paul’s campaign is relying heavily on youth engagement via social media to give the candidate the lightning strike his campaign has long been awaiting.

The campaign announced Thursday that it has established 400 “Students for Rand” chapters at colleges and universities in all 50 states. Paul and his advisers are quick to tout the campaign’s activity on social media platforms like Facebook, Twitter, Snapchat, Instagram, and Vine, noting that many young people, particularly millennials, do not get their news from traditional outlets.

In a memo circulated to reporters last month, Paul’s campaign manager Chip Englander and chief strategist Doug Stafford attempted to combat the “false narrative” that the campaign was on life support as the Kentucky senator’s poll numbers gradually fell. Student engagement is essential to the campaign, Englander and Stafford wrote at the time, and they have been betting on a breakthrough in the near future that they hope will be fueled in large part by college students in Iowa who will not be on their winter break when the Iowa caucuses take place on Feb. 1.

In that same memo, though, Englander and Stafford pinned some of the blame on reporters, accusing them of only covering Paul’s drops in the polls while ignoring momentum swings that have come from various straw poll victories.

“The media is fixated on insisting that [Paul] should get out of the race even though he continues to win every time votes are counted and the polls show him on the rise,” they wrote in the October memo.

Given the opportunity to compare his media strategy to that of Democratic presidential frontrunner Hillary Clinton, Paul said simply, “well, we don’t put a rope around reporters,” referring to a July incident during which reporters covering the former secretary of state at an Independence Day parade were corralled by a rope.

At the rally itself, Paul discussed his well-known views on NSA surveillance, indefinite detention of U.S. citizens, criminal justice reform, and the Bill of Rights. At a press availability, he pushed back at renewed calls for more surveillance in the wake of recent terror threats following the attacks in Paris, and slammed Sen. Marco Rubio (R-FL) for his missed Senate votes.

Overall, the campaign still believes it has the financial resources that are necessary for the long haul. Still, the current RealClearPolitics polling average has Paul tied for 7th place nationally with 3.2 percent support. But if lightning strikes at just the right time, Paul’s advisers say, it will stamp his one-way ticket to the Republican National Convention next July.