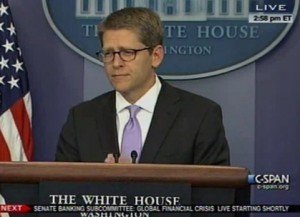 Mitt Romney‘s presidential campaign has drawn widespread criticism from the press for its dishonest use of a quote from then-Senator Barack Obama in its new campaign ad. Rather than apologizing, though, the Romney campaign is engaging in a delusional victory dance, telling Slate’s Dave Weigel that White House Press Secretary Jay Carney was having a “total meltdown” over the ad. That delusion bespeaks the sad truth that they’re desperate to have anyone talking about them.

The commercial’s fundamental dishonesty drew immediate criticism, and sparked conversations about the political media’s inability to call a lie a “lie,” rather than use tepid descriptors like “misleading,” or lay off the dishonesty as some kind of subjective phenomenon, like, “Some say the ad is dishonest.”

RELATED: Lawrence O’Donnell Blasts The Media For Not Calling Mitt Romney A Liar

While the reaction from the media was strong and negative, and the ad prompted a response from the DNC, reaction from the campaign has been relatively mild. Obama campaign spokesman Ben Labolt told HuffPo’s Jon Ward that the Romney ad was “a deceitful and dishonest attack,” and immediately pivoted to what the President has been talking about for months. “While the President brought us back from the brink of another depression and is fighting everyday to restore economic security for the middle class, Mitt Romney opposes the President’s plan to create 2 million jobs and instead proposes a return to the same economic policies that led to the recession.”

It was somewhat surprising, then, when Romney adviser Stuart Stevens told Slate’s Dave Weigel that the President’s reelection team was having a “total meltdown” over the ad:

“There was a time when the Obama campaign had real discipline,” joked Stuart Stevens, a senior Romney strategist. “Today was a total meltdown. You had the press secretary to the president of the United States talking about an ad that was running on one station in New Hampshire. There was a time when Jay [Carney, a former reporter for Time] wouldn’t even have written about this. Total meltdown. It’s as if you have somebody on a witness stand, accused of anger management issues, and he jumps off the stand and comes after you.”

Set aside the ludicrousness of the premise, which is basically, “We lied about them, and they didn’t like it! Ha-ha!” Let’s take a look at the “total meltdown” that Carney had aboard Air Force One Tuesday, en route to New Hampshire: (transcript via email from the White House)

Q Jay, Mitt Romney is unveiling his first television ads in New Hampshire today, and they’re all aimed at Obama. Is the President going to be taking on Mitt on this trip today, or is the focus the payroll tax?

MR. CARNEY: Focus on the urgent need to grow the economy and create jobs, and, specifically today, to ensure that Americans have extra money in their pockets next year to help them pay their bills and make ends meet, and also to grow the economy. He will not be talking about the many different candidates for the Republican nomination today.

I can say, about that ad — I think the campaign has made comment. I mean, what — seriously? I mean, an ad in which they deliberately distort what the President said? I mean, it’s a rather remarkable way to start, and an unfortunate way to start. And I’m pleased to see numerous news organizations point out the blatant dishonesty in the ad.

Jay Carney is about as even-tempered as his famously Spock-like boss, but even for Carney, this hardly constitutes a “total meltdown.” He did use the “U” word (unfortunate), though.

This is one of those areas that gets mainstream news organizations into trouble, because “total meltdown” is a self-evident characterization, and as such, tough to pin down as a “lie,” but any reasonable person can evaluate Carney’s response, and conclude that Team Romney is, at best, lying to themselves.

By declaring that the ad “worked,” the Romney campaign is exposing the spot’s true mission. The GOP base has given a parade of candidates a ride at the top of the polls in order to avoid having to nominate Mitt Romney, an admittedly hurtful exercise. This ad was an obvious attempt to punch up at President Obama, and around current leader Newt Gingrich (and whoever is on deck), to change the subject.