Reddit Has Sort Of Become a Pro-Donald Trump Wasteland
Opinion

Reddit Has Sort Of Become a Pro-Donald Trump Wasteland 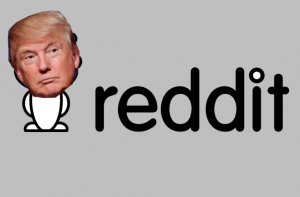 Donald Trump‘s relationship to the media and other outlets has been based more or less on one simple fact: if he gets a good review or write-up, the organization is a glowing example of journalistic integrity. If a site bashes the real estate mogul, it’s an hack lying effort that no one reads. In keeping with this history, you can soon expect the Donald to weigh in favorably about the minds of Reddit.

At least, the millions of Reddit users who have seemingly hijacked the so-called “front page of the internet” and turned it into an absolute troll-ridden circus of pro-Trump propaganda. In the month of March alone, the sub-Reddit (a specific category on a topic within the larger Reddit community) called r/The_Donald racked up over 51 million page views, even though it only registered 12.6 the month before (and by further comparison, a paltry 1.3 in January). Yes, it would appear as if Reddit users, many of whom are the sort of anonymous web urchins who exist simply to tear down things of high moral stature, have embraced the rhetoric and popularity of the outsider candidate leading the Republican nomination for President.

The latest controversy to rile up the Reddit base, as indicated by MSNBC online, has surrounding the Colorado convention where Trump got demolished, losing all 34 available delegates to Texas Senator Ted Cruz. Despite the fact that all of the campaigns knew about the state-by-state convention rules well in advance, the Trump cause has thrown nothing short of an embarrassing hissy fit of epically juvenile proportions, claiming that the jig to dethrone Trump is up. “[T]he system is rigged. It’s crooked,” the Crybaby in Chief recently told Fox & Friends.

One Redditor bashed Cruz in the wake of the Colorado controversy, writing (anonymously of course, so as to not trace him to his mother’s basement), “Raphael the Sniggering Rat is trying to stump, saying Trump is ‘whining’ about Colorado, and still claiming that people in the state actually voted at all.” Another highly-rated post reads, “Ted Cruz always looks like he just crapped his pants a bit and hopes you didn’t notice.”

Although that last one is admittedly pretty funny (the humor and wit on Reddit tends to be unmatched considering its massive expansive) the users who have pushed the Trump agenda forward have done so at an astonishing rate. The attitude that we’ve long seen from the Trump campaign naturally goes hand-in-hand with the sort of anti-PC culture that dominates the popular website. After all, it took years for the site’s managers to finally remove six sub-Reddits that were in blatant support for the white supremacy community. Among these were “CoonTown”, “bestofcoontown”, “CoonTownMeta”, and of course, “WatchNiggersDie”.

The natural outsider status of Reddit has made it the perfect breeding ground to serve as a sort of digital battlefield for furthering the Trump brand. But just as we frequently debate the merits of the Trump-and-Sanders outsider argument, so too does the site. Vermont Senator Bernie Sanders, the self-described anti-establishment Democratic-Socialist, also has a popular following on Reddit; r/SandersForPresident brought in 35 million visitors in March alone.

Although the users on Reddit are anonymous, one of the assumed leaders of the site’s pro-Trump movement who goes by the name CisWhiteMaelstrom told MSNBC over the phone that he, “is a law student in his early 20s looking to go into whichever field will allow him to make the most money,” which is a surprise to absolutely no one. As long as the Trump Train continues to pick up stream heading for the Cleveland Convention and the general election, you can bet that the scores of passionate Reddit users interested in furthering his cause will find hawkish and innovative ways of winning the digital war for votes.
—