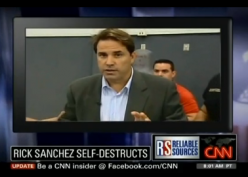 A long discussion on CNN’s Reliable Sources this morning about the firing of Rick Sanchez, whether or not CNN fired him for the right reasons, and what may have inspired Sanchez to say these things in the first place.

Former CNN correspondent Jamie McIntyre thinks CNN may have fired him for the wrong reasons:

Well, I think the unfortunate part, actually, is that Sanchez was fired for these intemperate comments and not really for what he did on CNN, which is seen by many people in the industry as kind of a joke. I mean, his delivery where he adlibbed the whole show and therefore had a lot of little slips that Jon Stewart made fun of…The point Jon Stewart made fun of him, not because of his ethnic heritage.

Ouch. Former ABC News anchor Carole Simpson thinks Sanchez exploded because he was angry about a number or things and just overloaded.

I think the problem is that all of this was building up. Was he not losing his show because the Eliot Spitzer/Parker show is about to start? It was a day in which maybe everything — what, the perfect storm came together? And I think what happened was he just exploded with all of these things that had been in the back of his mind, and unfortunately, accusing Jews of being in control of everything and being prejudiced against him was unfortunate.

Except, as Howie Kurtz points out, Sanchez never had that time slot he was merely a temporary fill in. Meanwhile, WaPo‘s Paul Farhi thinks Stewart was a bizarre target:

Watch the segment below.