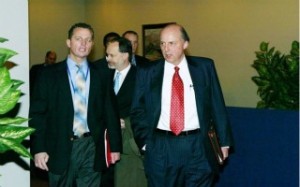 Washington Post blogger Jennifer Rubin reported on Tuesday that former Massachusetts Gov. Mitt Romney’s recently hired foreign policy advisor, Richard Grenell, has chosen to depart the campaign. Rubin reports that Grenell believed that, at a time when foreign policy had come to the forefront of the national conversation following President Barack Obama’s politicization of the anniversary of the death of Osama bin Laden, his presence as a senior policy advisor would be muted due to his sexual orientation. Grenell is gay, and Rubin believes that Grenell felt he was being hounded out of the GOP presidential nominee’s camp by the party’s traditional marriage advocates. Rubin and Grenell may be incorrect, but it is hard to argue with their sentiment. Particularly because there was open resistance to Grenell due only to his sexual orientation from voices within the GOP. Those voices have robbed the Romney campaign of a strong advisor and a net benefit to the campaign. Perhaps it is time for the party to examine who among them represent the electoral liability.

Grenell was appointed by President George W. Bush as Director of Communication and Public Diplomacy for the U.S. ambassador to the United Nations in 2001. He worked closely with American foreign policy hands like John Negroponte, John Danforth, John Bolton and Zalmay Khalilzad. Grenell has worked in communications shops on public affairs and advocacy issues since 2009 and now serves as a partner in his own California-based firm. Grenell served as spokesman for New York Gov. George Pataki and Michigan Rep. Dave Camp. He is a seasoned and dedicated Republican operative. His service to the Romney campaign could have been invaluable.

But now he is gone for now. Rubin confirms that Romney campaign staffers tried to talk him out of his decision, but Grenell had reportedly concluded that his personal life and his sexual preference would become overshadow his policy proscriptions and could reflect poorly on the Romney campaign.

Rubin concludes that “anti-gay” elements of the Republican party hounded him from his appointment. Rubin, never shy about tarring unspecified but nevertheless prevalent elements of her party with a broad brush, may be overreaching. But she is right in identifying that some within the Republican commentariat opposed Grenell’s addition to the Romney campaign simply because he is gay.

One wonders precisely what the conservative blogosphere and the anonymous masses that populate their comments section have to gain from this pyrrhic victory.

Surveys regularly and consistently confirm that the GOP has a leg over their Democratic competitors on issues like which party is more trusted on the economy and on foreign policy. When those same survey respondents are asked about Republican’s values-based initiatives, those surveyed suddenly turn cold to the GOP.

The shift in public opinion on gay marriage, for examples, is staggering and the pace of that change is equally eye-opening. A Pew Center poll from April shows that 47 percent of those polled support allowing gay and lesbian couples to marry while only 43 percent oppose.

Rubin notes that it was traditional marriage “activists” like National Review’s Matthew J. Franck who helped to derail Grenell’s position as foreign policy advisor. The particular post of Franck’s that she links to in the Post borders on paranoia.

In National Review, Franck writes a passionate rebuttal as to why Grenell needed to be bounced from the campaign and couples it with a fevered fantasy that the foreign policy expert’s political allegiance extend only so far as his sexual preferences:

Suppose Barack Obama comes out — as Grenell wishes he would — in favor of same-sex marriage in his acceptance speech at the Democratic National Convention. How fast and how publicly will Richard Grenell decamp from Romney to Obama?

To his credit, National Review economic blogger Kevin Williamson challenged Franck repeatedly on his attacks on Grenell. Franck’s views cannot be said to characterize the National Review any more than did those of recently discharged blogger John Derbyshire. But Franck’s response is to Williamson verges on the unhinged:

Williamson is quite sure that it is harmless to hire an ardent advocate of same-sex marriage for a prominent place in a campaign pledged to defeat same-sex marriage, because the hireling’s brief runs to matters not directly related to the issue. If he thinks that the gay-rights agenda doesn’t have any bearing on American foreign policy, he’s not paying attention. If he thinks that influence doesn’t run up as well as it does down in the hierarchy of a campaign, that voters are not inclined, with some justice, to regard hiring decisions such as this as an indication of the seriousness of the candidate about such a subject, and that it doesn’t matter whether the campaign is seen to be unequivocal on an issue that moves many millions of voters, then he is not the keen observer of politics I took him for.

Franck does represent an element of the Republican party that seems more enamored of victimhood and perpetual siege mentality than genuine political victory. More realistically, the only victory that is worth winning is one on their terms and those terms must include a central element on the GOP platform for traditional marriage. No other victory could be worth the fight.

Romney is already on record supporting an amendment to the Constitution that would define marriage as existing only between a man and a woman (how Romney proposes to pass this with two-thirds majorities in Congress and then achieve ratification in 38 states when the same feat could not be accomplished by a Republican president and Republican majorities in both chambers of Congress in 2004, I have no idea).

The harm he has done his campaign by going on record as being out of step with the plurality of the nation’s electorate cannot be undone by his moving toward the center and, depending on the level of panic in the White House as fall approaches, gay marriage could be on the ballot as the Obama campaign continues to flirt with adding that issue to the Democratic platform.

Commentators like Franck are not the only individuals worthy of blame in this incident – he merely represents a prominent voice articulating a position that merits condemnation. It was the Romney campaign that opted to sideline Grenell. It was their decisions that convinced Grenell he was detracting from the message of the Republican ticket. That is equally detestable, but the campaign only did so in order to appease a vocal, intractable minority within the party that reflects an even smaller portion of the general population. The Romney campaign is as much to blame for Grenell’s loss as are columnists like Franck.

Republicans would be wise to perform some introspection and observe whether it’s the party’s Francks (which The Atlantic notes are numerous and wide spread) or the party’s Grenells that represent the electoral albatross around their collective necks. A hard fought election is ahead of us and victory is possible. But the GOP needs to focus on their party’s strength with open minded, fair and ideologically neutral voters. Grenell represents a strength. I’ll leave it up to you to determine precisely what columnists like Franck represent.