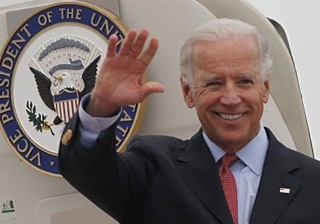 In America, Vice President Joe Biden has developed a fairly large following beyond his politics for being somewhat fast and loose with his words, a trait that did not go unnoticed in the 2008 election. These days, the Vice President is on what Reuters is calling a “charm mission,” which so far seems to have involved him making several Vintage Biden jokes that have been met with blank stares.

The trip appears to have involved plenty of meetings, both publicly and privately, where the Vice President spent his time “pulling punches but not punchlines.” Given the current tension between the two nations, the Vice President’s national debt jokes seem even more comically out of place somehow, especially contrasted with the behavior of the Chinese Vice President:

“Good to see you again,” [Chinese Vice President] Xi said. “I know you are very busy with national affairs at home.”

“You ARE national affairs,” Biden told his counterpart from the United States’ largest creditor. […]

“I used to have an important job when I was chairman of the Foreign Relations Committee,” Biden told Wu. “I had a big office, large staff. Then I became vice president.”

Members of the press pool speculated that joke, at least, may have been lost in translation.

He also walked around and schmoozed with Chinese delegates, the report narrates, by complimenting their hair. While the report certainly fosters an image of Biden as a free-wheeling but ultimately lovable sidekick– the Oscar to President Obama’s Felix– one hopes colorful writing went into making the extremely important foreign policy trip sound a bit more sitcom-like than it would have otherwise.

It appears things went a bit better than the Reuters report makes them out to have, however, as today, President Biden was scheduled to meet yet against with Vice President Xi, this time after a tour of economy boom town Chengdu and once again casually over a meal. The Vice President’s trip is scheduled to last five days.