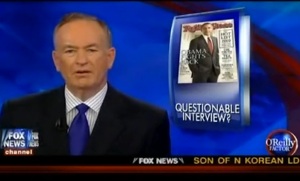 This week’s issue of Rolling Stone magazine features an interview with Barack Obama, in which the president says that Fox News has “a point of view that I disagree with,” continuing “It’s a point of view that I think is ultimately destructive for the long-term growth of a country.” Bill O’Reilly addressed this issue in his “Barack and a Hard Place” segment with Monica Crowley and Alan Colmes last night, and was surprisingly tolerant and understanding of Obama’s frustration with Fox News.

O’Reilly opened the segment by reminding viewers that just a few months ago, another article in Rolling Stone effectively took out General Stanley McChrystal, then wondered why Obama would speak to an outlet that had been so negative to someone within his administration. He then aired a statement that the White House had provided “The Factor” that read “Rolling Stone isn’t the only outlet the president has ever spoken with in which we didn’t agree with every article they have written or broadcast,” a not-so-thinly veiled jab at Fox News.

After having Alan Colmes restate Obama’s position in a rather toothless way, Dr. Monica Crowley took a turn, and in the eyes of Obama supporters, likely proved his point by saying:

Barack Obama is a radical progressive, but he’s not a stupid man and I have not been able to figure out for the life of me why he directly, the president of the United States — not some flunky, not his chief of staff, Rahm Emanuel — the president of the United States, continues with this theme, not only demonizing Fox News, demonizing the Tea Party, Talk Radio, anybody who disagrees with him.

O’Reilly then added temperance and measure to the debate, though in his inimitably condescending way, suggesting that they “put themselves in his Birkenstocks.” Watch the clip and see how it turns out for yourself.