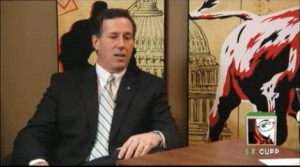 In an interview with conservative pundit SE Cupp, former Senator (and possible presidential hopeful/wishful) Rick Santorum ticked off several reasons why he believes GOP supernova Sarah Palin is skipping this year’s Conservative Political Action Conference (CPAC), chiefly citing “financial benefit,” but also that she’s “the mother to all these kids.”

Is this a shot across Palin’s bow for 2012? Either way, it’s an unfair, sexist premise that has no basis in fact.

Here’s a clip of the interview, from GlennBeck.com:

Let’s just break that down for a second. He’s essentially saying that Palin turned down the CPAC keynote slot because she’s too busy gettin’ paid (Palin does command hefty speaking fees), but that he wouldn’t have turned it down because he’s not “the mother to all these kids.” Palin has five children. Santorum has seven, so the implication is that there’s something about being a mom that necessitates whoring yourself out for speaking fees, while dude parents can freewheelingly stick to their principles.

Now, I’m certainly not afraid to criticize Sarah Palin when she deserves it, but Santorum’s remarks are not only unfair and offensive, they’re also completely unfounded.

First of all, despite her ability to collect hefty speaking fees, Sarah Palin actually does manage to do things for which she is not being paid. I’m not that familiar with her datebook, but even I noticed her December trip to Haiti. The only payment Palin received for that trip was a heap of inexplicably bad press. There’s no comparison between visiting Haitian cholera clinics and keynoting at CPAC, but it definitely shows that time and money are not the issue.

Some others have wondered if Palin skipped out as part of a wider boycott centered around the inclusion of gay conservative group GOProud. Palin put that notion to rest in a recent interview, defending the group’s inclusion (while also casting them as adversaries by comparing them to liberals).

The fact is, Palin has now turned down four CPAC invitations, and while she’s never given an explicit reason, there’s a pretty obvious one, at least for the last two. American Conservative Union Chairman David Keene, the organizer behind CPAC, had Palin booster John Ziegler ejected from Western CPAC in 2009 after Ziegler grilled Keene about comments he’d made that Sarah Palin “whined” about media coverage, and that she “bailed” on her post as Alaska Governor.

Ironically, Ziegler also confronted Keene about allegations that his organization would do anything for money, offering him $20 to write a pro-Palin op-ed.

Aside from Keene’s attacks on Palin, there’s also a lot of dissatisfaction with Keene and the ACU among conservatives, in general. Most won’t speak about it publicly, but the FedEx scandal, the perceived coddling of fringe elements at that Western CPAC, and other issues have dimmed some of the group’s luster among conservatives. While CPAC is still the best game in town for most conservatives to meet, greet, and share influence with others, Palin stands apart. CPAC needs her far more than she needs CPAC.

That actually points up the biggest fallacy in Santorum’s argument. Palin is a money-making machine, which i s all the more reason why she could afford to take a weekend off to keynote CPAC.

If there’s really no such thing as bad publicity, then Santorum will likely get a huge bang for the buck with this interview. Something tells me, though, that it won’t be a net gain for his already dim presidential hopes.