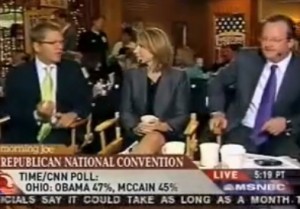 The recent appointment of former Time magazine reporter Jay Carney as White House Press Secretary has already spawned an effort to discredit Carney, and his former colleagues, by right-wing media watchdog Newsbusters. The right’s answer to Media Matters has released what it calls a “Media Bias Dossier” on Carney, but at eight quotes in a twenty-year career, it’s pretty thin gruel. It might also surprise Newsbusters to know that libeeral watchdog Media Matters has an even thicker “dossier” on Carney, and that Redstate’s Erick Erickson is among Carney’s biggest fans.

Carney’s objectivity as a journalist is a legitimate topic for debate, but is largely irrelevant to his new job. The point of this exercise, then, is more to buttress the right’s contempt for mainstream journalism than it is to discredit Jay Carney, but the result is an assault on his character and professionalism. To that end, I encourage readers to examine the “sins” that Newsbusters‘ Tim Graham lists in Carney’s “dossier.” They seem to include saying nice things about the Clintons, and making observations about George W. Bush, but Graham never bothers to challenge the accuracy of what Carney is saying.

A fine example is the one Graham uses in the introduction to his piece:

How much of a liberal and Democratic partisan was new White House press secretary James Carney at Time magazine? Digging through the MRC archives provides a dossier of clues. Here’s one. After George W. Bush went jogging with him in 2000, Carney turned around on his fellow Yale alum and “reported” that “Bush tore into McCain like a pit bull let loose in a slaughterhouse.” Balance and equanimity were not Carney’s style. He rose through the ranks to Washington Bureau Chief in 2005 by toeing the liberal line…

That quote is cherry-picked from “My Jog With George,” and while the observation may seem harsh, compared to the reality of what Bush’s campaign did to McCain in South Carolina, the assessment is generous. The balance of the piece paints Bush in a fairly positive light, with much of their conversation remaining off the record. Even granting Graham’s premise, though, is the reader to conclude that Carney was “in the tank” for John McCain?

The liberal blog Crooks and Liars certainly thought so when they accused Carney of saying that “Iraq is McCain’s Winning Issue” as a member of a February, 2008 This Week roundtable. Of course, that’s not exactly what Carney said:

CARNEY: On Iraq, I’m not sure that it’s…that he can’t win that argument. I think that if you’re forward looking, that the public has already decided what it thinks about what happened and how we got in and whether it’s been done well. But I think, you know, McCain can effectively frame an argument that says, you know, “I’m a much better steward going forward” than Democrats who are going to come in and say, “let’s just get out.” Imagine what will happen with the military brass and conservative establishment and people who just don’t want to see us hightail it out of there without honor. I think that can be a very effective argument and the Democratic nominee, whether it’s Obama or Clinton, has to have an answer to that that’s acceptable.

Over the years, liberal media watchdog Media Matters has also whacked Carney repeatedly, most notably regarding his assessment of a McCain campaign ad. They have also published a laundry list of Carney/Time Magazine grievances, and took issue with Carney himself on six other occasions. That’s not the kind of record you’d expect to see from a “liberal and Democratic partisan.”

You also wouldn’t expect such an individual to say that “the left is as full of unthinking Ditto-heads as Limbaugh-land,” which Carney did in response to liberal bloggers who flamed him over his comparison of George W. Bush‘s political standing in 2007 with that of Bill Clinton in 1995. While some might read the Limbaugh crack as a “partisan” jab, it’s fair to say that Rush earned the rebuke fair and square. A year earlier, he attacked Carney and his wife, ABC News National Correspondent Claire Shipman, as “slave-owner and husband.”

Do all of these attacks by liberals prove that Carney is actually biased in favor of conservatives? I haven’t seen anyone, even Media Matters, make that claim. The left’s knock on the mainstream media has long been that they’re too susceptible to the Drudge-driven right-wing echo chamber, and that they respond to charges of bias by replacing objectivity with faux “balance.” In that regard, some of the knocks against Carney are of debatable merit.

Since he’s going to be the next White House Press Secretary, I’ve tried to get a handle on Carney’s work as a journalist, as well. The most remarkable thing, to me, is that in a twenty-year career, Carney has largely avoided controversy, and he hasn’t done so by hiding in obscurity. Not only was he an early adopter of the high-volume, less-filtered blogging platform, Carney has also been a fixture on political television. A review of his Clinton-era TV appearances reveals an analyst with a cool temperature, in stark contrast to the politics of the time. In particular, his take on the third Bush/Gore debate belies any partisan bias at all, as he generally agrees with a panel that awards the debate to Gore on the substance, yet concludes that it helps Bush. It’s an analysis that probably didn’t please either “side,” but turned out to be correct, if self-fulfilling.

What controversy Carney has generated has had more to do with his subjects than himself. He was best known to me for his August, 2008 interview with John McCain, which served the dual purpose of dispelling the notion of an anti-McCain bias (Carney talks about the press’ well-known affinity for McCain to that point), while illustrating the degree to which McCain was becoming desperate in the run-up to his selection of Sarah Palin as Vice Presidential candidate.

Days later, in an appearance on MSNBC’s Morning Joe, Carney took on McCain campaign adviser Nicole Wallace, in an exchange that presciently drew the battle lines for the next several years of our political discourse. Carney challenged the McCain campaign to let Palin talk to reporters, as Wallace mocked the institution of journalism, all while Carney’s future predecessor, Robert Gibbs, watched from the sidelines:

As we all know, Palin did eventually face a mainstream media that asked her “trick questions” like “What do you read,” and the result was the stepped-up effort to discredit journalism that you see today.

That’s why Carney’s supposed “bias” isn’t really the point, here. Until he was named White House Press Secretary, the right didn’t have any problem with Jay Carney. In fact, Redstate chief and CNN contributor Erick Erickson counts himself a “big fan” of Carney’s, whom he called “an awesome reporter. He always played it middle of the road and tried to get both sides.”

Now that Carney is press secretary, his supposed “bias” is irrelevant, but his relationships with his former colleagues are not. Discrediting Carney sets the table for accusations that the White House press corps is going easy on Carney, or that he’s spoon-feeding them stories, and generally reinforces the conservative notion that the mainstream media are a bunch of in-the-tank liberals.

This is perfectly illustrated by Carney fan Erick Erickson, who makes the assertion even as he’s praising Carney as an “awesome reporter:”

Here’s the thing folks: Jay Carney is an awesome reporter. He always played it middle of the road and tried to get both sides, but his biases were always to the left.

See that? Even the most “awesome” mainstream reporter is a biased lefty. How do we know this? Erickson explains that the proof of mainstream media bias is in the fact that Republicans don’t hire them. No, I’m not kidding:

The point here is this: have any major reporters gone on to work for Republicans? The left likes to use Tony Snow as their example, but of course Tony was a well known conservative and Republican, having guest hosted for Rush Limbaugh for a number of years.

But who in the mainstream media ever goes to the Republicans? Linda Douglass of ABC News went with Obama. Carney is going with Biden. What about ABC’s Claire Shipman, Carney’s wife? Do you really think she’s going to cover the political beat fairly with her husband working for Biden? I doubt it.

You might remember Linda Douglass. She’s the former journalist whom Erickson compared to Joseph Goebbels, then falsely accused of making her own Nazi reference. Neither Erickson, nor Newsbusters (who were strangely silent regarding Erickson’s verbal assaults on Douglass) have earned the benefit of the doubt to cast stones at Carney, or the White House press corps.

Time will tell how Carney performs in his new job, but nothing I’ve seen in two years of covering the daily grilling of Robert Gibbs suggests that the press corps has gone easy on him, and if their comments about the challenges facing Carney are any indication, that’s not likely to change.