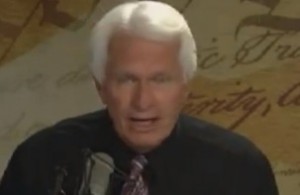 Rep. Todd Akin (R-MO), the gift that keeps on giving, meet Bryan Fischer, the other gift that keeps on giving. Evangelical preacher Bryan Fischer, the director of issue analysis at the American Family Association, took to his radio show to defend the coiner of “legitimate rape” against what Fischer seems to think is something akin to a gang rape. He didn’t use those words, but danced close enough to them to earn headlines to that effect.

Describing the who’s who of conservatism that has asked Akin to bow out of the US Senate race in Missouri, even name-checking Rush Limbaugh, Fischer said ““everybody is gang tackling Todd Akin.”

“You talk about a forcible situation,” he added, “you talk about somebody being a victim of kind of  forcible assault, that would be Todd Akin.”

If the name Bryan Fischer sounds familiar, it’s because he’s the guy who helped force openly gay Mitt Romney spokesman Richard Grenell out of his job, then turned around and slammed Mitt Romney for letting him do it.

Now, he’s choosing sides with the guy who has managed to do what Rachel Maddow‘s years of dogged reporting and commentary could not: make the mainstream media finally notice that the Republican Party has been completely taken over by insane people. The big news all over CNN today was that the Republican Party is adopting a platform that includes a ban on abortions, even in cases of rape and incest, which has been in every Republican platform for 30 years. The mainstream media is reporting on vice-presidential nominee Paul Ryan‘s co-sponsorship of the “forcible rape” bill, which Rachel Maddow has been reporting on every night (and probably in her sleep) for a year and a half now. Ditto the Romney/Ryan ticket’s support of “personhood” amendments, which makes using the birth control pill murder.

Thank God for Todd Akin, thank God for Bryan Fischer, and if things get too bad for Akin at the bottom of that pile, at least he can take solace in the fact that he can’t get pregnant from it.