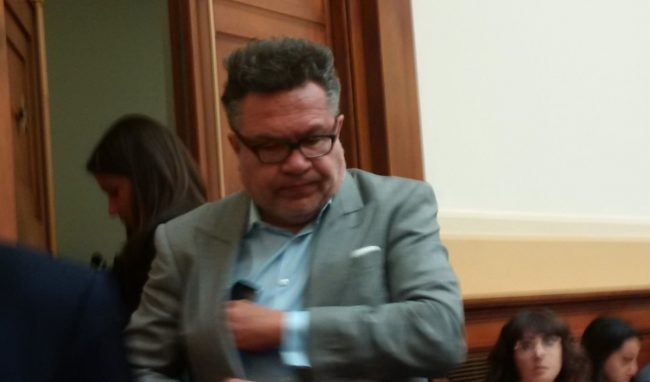 Rinat Akhmetshin has been the man of hour since revelations emerged that he attended the infamous Trump Jr meeting.

But it get’s better. In addition to that, it now appears that he worked as a lobbyist along alongside Fusion GPS, the company which put together the infamous Trump dossier.

The unverified dossier was published by Buzzfeed in January and was intended as opposition research against Trump. It got it’s nickname the “Pee Tape Dossier” because of the claim contained within that Russian intelligence agencies had footage of Trump urinating on a prostitutes in a bed at the Ritz-Carlton in Moscow.

The collaboration was highlighted in a complaint filed by GOP Senator Chuck Grassley last year. According to Grassley, Akhmetshin also did not register as a foreign agent during his lobbying activities.

“It is particularly disturbing that Mr. Akhmetshin and Fusion GPS were working together on this pro-Russia lobbying effort in 2016 in light of Mr. Akhmetshin’s history and reputation.  Mr. Akhmetshin is a Russian immigrant to the U.S. who has admitted having been a Soviet counterintelligence officer,” Grassley said in the complaint.

Akhmetshin and Fusion GPS also lobbied against the Magnitsky Act, a law passed by President Obama in 2012 which gave the U.S. power to defend itself from Russian corruption by withholding visas and freezing financial assets of Russian officials that have violated human rights. The act was named after Sergei Magnitsky, who discovered $230 million missing from Russian tax officials and police officers, but was arrested and died in prison after his discovery. When the U.S. passed the law, it upset Russian president Vladimir Putin so much that he immediately retaliated by outlawing the adoption of Russia orphans by Americans.

Akhmetshin is a former Soviet Intelligence Officer who came to the U.S. in 2009. He has been working as a lobbyist since and was involved in a lawsuit that claimed he masterminded a hacking scheme and ran negative public-relations campaigns.

According to the complaint, Akhmetshin also lobbied alongside former Congressman Ron Dellums, who was reportedly hired by Natalia Veselnitskaya, the Russian lawyer who also met with Trump Jr. At the time, they told staffers “they were lobbying on behalf of a Russian company called Prevezon and ask[ing] [the Committee] to delay the Global Magnitsky Act or at least remove Magnitsky from the name,” Grassley’s complaint said.

Prevezon is a Russian holding company that had ties to the money laundering fiasco that Magnitsky uncovered. They paid $6 million to settle and did not admit fault. Even more interesting is Veselnitskaya was Prevezon’s lawyer and came to New York for this case, which is where she was just before her meeting with Trump Jr.