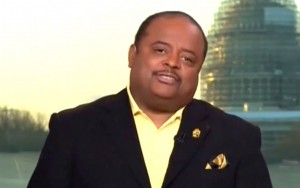 The controversy over this year’s all-white Oscar nominees has created several fascinating subplots, one of which is the running battle between Fox News regular and Clueless actress Stacey Dash and Black Entertainment Television, or BET. Dash opined that if black people want to be included in the Oscars, then they should do away with blacks-only institutions (which actually do include whites) like BET, the BET Awards, and the NAACP Image awards. BET clapped back with a tweet showing a photo of Dash starring in the BET program The Game and asking for their check back, but on Thursday morning’s NewsOneNow, host Roland Martin went them one better.

Martin began by pointing out that white people do participate in and win the award ceremonies Dash cited, then began a slideshow of Dash’s appearances on the covers of pretty much every black-skewing magazine known to man, and several I think he just made up. He finished by advising Dash to give him a call next time before she goes on Fox News:

If you go on Fox News and you dare to open your mouth to criticize things that are black-specific, you might want to check your own history and your past, Stacey. Because guess what? I know how to use Google, I know how to call you out, because see I’m not a fake, fraudulent commentator on television, see? I don’t act. This is real. I went to school for this. You didn’t.

So the next time you embarrass yourself, and you lie, please pull your phone out, pull your iPad, and say ‘Let me at least call a brother like Roland, who might tell me before I go on, don’t make a ass outta yourself, lookin’ like a damn fool.’

To answer your first question, you can subscribe to Smooth magazine here. In answer to your second, no, I haven’t made Roland’s reactions into a series of GIFs, but someone should.

Aside from bringing some major and much-needed funk to this issue, as Roland would say, he manages to critique Stacey Dash without making it about her own blackness, but rather about her factually deficient attack on blackness. Trying to be the arbiter of blackness is a trap for anyone, especially if you’re white, because there are as many gradients to blackness as there are to anything else. Ironically, people would know that better if we had a more representative media culture, and there’d be no need for a BET. That’s an obvious point that has been lost in all the fact-wrecking and fact-checking around Stacey Dash.