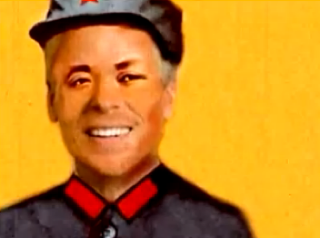 America has only experienced the first of many primary contests this week, and already a candidate for “most offensive campaign ad” has come to the fore, and with gusto. The group “New Hampshire Liberty 4 Paul”– supporting Rep. Ron Paul— has come out swinging against Jon Huntsman for his ties to China, asking whether he is the “Manchurian Candidate” and whether he lacks “American values” for having lived in Beijing.

RELATED: Herman Cain Seems To Reveal That He Was Unaware Of China’s Nuclear Capability

The ad begins asking of Huntsman, “The Manchurian Candidate,” “What’s he hiding?” It features “traditional” Chinese music and clips of Huntsman doing things in China: speaking Mandarin, taking interviews from Chinese press, walking around in China– you get the idea. It then asks a series of questions during the montage like, “American values, or Chinese?” and “Weak on China? Wonder why?” It also takes a detour to slam him for being Mormon (“A man of faith?”) before the coup de grace, a doctored photo of Huntsman in what appears to be Maoist military garb. Essentially, it makes “Willie Horton” look like Will.I.Am’s “Yes We Can” ad.

The ad is part of an account labeled “New Hampshire Liberty 4 Paul” on YouTube and appears to have no connections to any actual Rep. Paul SuperPAC or his official campaign. But it has been floating around the blogosphere and, given that the reaction in many circles to it has been something to the effect of “those crazy Ron Paul fans strike again!” rather than “This is a joke, right?” is just as much of a problem– in fact– possibly the central problem– the Rep. Paul campaign faces in this election. The predominant attitude towards this campaign is that it would, entirely seriously, have supporters who would launch attacks like this. And even in the event that this ad is revealed to be a joke, the fact that most take it at face value is indicative of precisely the challenge Rep. Paul faces and what kind of campaign many– rightfully or otherwise– believe he is capable of.

Then there is the actual content of the ad, which is problematic (though not entirely surprising) in itself. There is a long and storied tradition on American history of discrimination against far east Asians, particularly of Chinese descent. While this ad, ridiculous as it is, may remind many of you of myriad different political attacks in the election sphere, the quote that came most to mind for me was from Justice Harlan’s dissent in the “separate but equal” case Plessy v. Ferguson. In short, this is what “non-racist” people sounded like, not so long ago in America:

There is a race so different from our own that we do not permit those belonging to it to become citizens of the United States. Persons belonging to it are, with few exceptions, absolutely excluded from our country. I allude to the Chinese race. But, by the statute in question, a Chinaman can ride in the same passenger coach with white citizens of the United States, while citizens of the black race in Louisiana, many of whom, perhaps, risked their lives for the preservation of the Union, who are entitled, by law, to participate in the political control of the State and nation, who are not excluded, by law or by reason of their race, from public stations of any kind, and who have all the legal rights that belong to white citizens, are yet declared to be criminals, liable to imprisonment, if they ride in a public coach occupied by citizens of the white race.

And that’s not even mentioned the (still totally legal!) internment of thousands of Japanese-Americans for no reason during WWII. Even when overt discrimination against black Americans became entirely socially unacceptable (some may argue it is still not entirely so), the alternative discrimination against Asian Americans was considered a responsible alternative. As far as history goes, Rep. Paul’s supporters may then be onto something here, igniting racial thoughts in voters that will cause Republicans to distrust Huntsman. But that doesn’t make it any less vile, and toxic for Rep. Paul himself should he not denounce it.