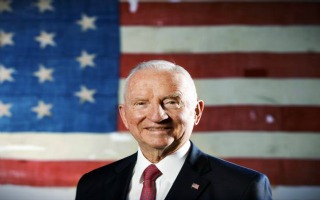 H. Ross Perot, businessman and former two-time presidential candidate with the Reform Party, announced his endorsement of Republican presidential candidate Mitt Romney on Tuesday. Perot ran for the president in 1992 and 1996 while focusing on reducing America’s debt and deficit to sustainable levels. “We can’t afford four more years in which national debt mushrooms out of control, our government grows, and our military is weakened,” said Perot.

In his endorsement of Romney, Perot touched on themes familiar from his first presidential bid in 1992. Perot talked about the increasing level of debt under President Barack Obama‘s leadership and growing domestic financial obligations that reduce America’s military preparedness.

Our country faces a serious choice. The fact of the matter is that the United States is on unsustainable course. At stake is nothing less than our position in the world, our standard of living at home, and our constitutional freedoms. That is why I am endorsing Mitt Romney in his quest for the presidency. We can’t afford four more years in which national debt mushrooms out of control, our government grows, and our military is weakened. Mitt has the background, experience, intelligence, and integrity to turn things around. He has my absolute support.

“Ross Perot’s accomplishments as an entrepreneur, as a political leader, and as a naval officer make him a living legend,” said Mitt Romney in accepting Perot’s endorsement. “He understands the challenges facing the nation and what it will take to meet them. I am proud to have his support.”