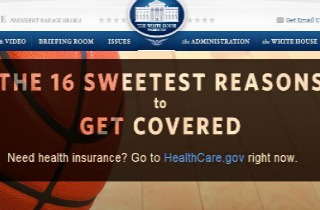 When the Affordable Care Act launched in October, enrollment figures were hard to come by. The consensus was, however, that due to the problems associated with the non-functioning federal insurance exchange portal, enrollments would be low. In November, the first figures were released and they were, as expected, dismally short of their targets.

But the ACA’s defenders insisted that, as was the situation in Massachusetts, younger people would procrastinate and only begin signing up toward the end of the open enrollment period when a penalty for not having insurance loomed. But with just two weeks left in the 2013/2014 enrollment period left, it seems safe to say that this surge in enrollments never materialized. Today, the pace of youth enrollments has remained relatively steady. At the end of February, only 25 percent of ACA enrollees were younger.

If you think this is not a problem for ACA supporters, you need only look to the White House’s full-court press (pun intended) in March designed to get young people interested in health insurance.

In the first weeks of March, President Barack Obama sat down with comedian Zach Galifianakis for his online interview program as part of a comedic effort to convince young people of the benefits associated with health coverage. Days later, a slew of celebrity moms joined the first lady as part of the ACA pitch, “#YourMomsCare.”

“We nag you because we love you,” Michelle Obama said to the camera in what has to be the most misguided effort to appeal to young people in the history of advertising.

The most recent pitch to young people to enroll in this apparently ill-fated program is the fact that the president has perverted March Madness into a pitch for the ACA. “The 16 Sweetest Reasons to Get Covered,” reads a post on WhiteHouse.gov which features a video showing two college basketball coaches informing young people of the increasingly urgent need for them to enroll in health insurance.

The post consists of 16 unexceptional GIF images which appear to have taken an intern all of 37 seconds to both select and embed. They also ask the user to vote on their favorite. “None of the above” is not an option.

Expect more of this kind of flailing desperation as the end of the open enrollment period nears.

But while the White House is devoting precious bandwidth to a halfhearted advertising campaign aimed at convincing young people to purchase a suboptimal product they don’t think they need, war looms in Eastern Europe as one of the world’s foremost nuclear powers seeks to unilaterally redraw the borders of Europe.

If nothing else, the White House’s actions this month reframe the term “March Madness” in a whole new light.