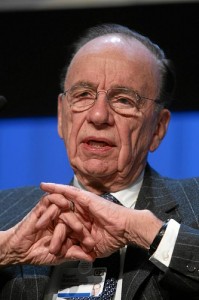 Last week, Rupert Murdoch made headlines when details about his iPad-only newspaper emerged. As Neal Ungerleider writes at Fast Company, though, Murdoch also did something else of note last week: he began “investing in an Israeli-American oil shale company with ties to Dick Cheney.” Conspiracy theorists, start your engines.

Murdoch just bought a 5.5% stake in Genie Oil and Gas Inc. He’s sharing that stake with Lord Jacob Rothschild, the billionaire Brit who may or may not moonlight as a Bond villain. Additionally, writes Ungerleider, Murdoch will join Genie’s advisory board, a group that already includes former VP Dick Cheney.

Genie and its investors seem to be aware that Murdoch and Cheney’s involvement could inspire skeptics to hypothesize about what the company might really be up to. So they’ve tried to nip those speculations in the bud:

Public statements by both Genie and their investors have stressed the firm’s American and Israeli (read: non-Arab, non-Iranian, non-Venezuelan) roots. According to a statement by Murdoch, “I believe Genie Energy’s technologies and vast shale oil licenses have real potential to spur a global, geo-political paradigm shift by moving a major portion of new oil production to America, Israel, and other western-oriented democracies.” Murdoch also said that “Covering and distributing news has been my life’s work […] If Genie’s effort to develop shale oil is successful, as I believe it will be, then the news we’ll report in the coming decades will reflect a more prosperous, more democratic, and more secure world.”

Perry was even more explicit, stating that “Both America and Israel have significant shale oil reserves. It’s difficult to overstate their potential to improve our respective economies and national security. […] Genie Energy is developing the technologies America and Israel want to make rapid progress toward energy independence, while IDT Energy is poised for continued growth in the consumer market. I’m very excited to work with their management team to help meet the energy needs of the U.S. and Israel for decades to come.”

Hmm—somehow, we’re still not convinced. Remember, after all, that The Simpsons—a show that coincidentally appears on the Murdoch-owned Fox network—correctly predicted 9/11 four years before the event. That means there must be more to Genie than meets the eye. Maybe that oil stuff is just a smokescreen concealing Cheney and Murdoch’s real intent: to assemble a shadow government and quietly engineer the coming of a new world order. Open your eyes, people!!