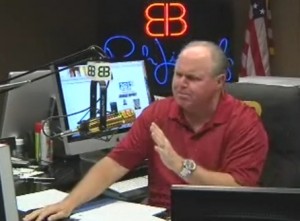 On Sunday, Mediaite published an article in which I was critical of Time Magazine World Editor Bobby Ghosh for statements that he made on Friday’s edition of Hardball. Ghosh explained why burning the Qu’ran was “much more inflammatory” than burning a Bible. Conservative radio host Rush Limbaugh took issue with Ghosh’s remarks on his Monday morning show, then slammed Mediaite by pointing out… exactly the same thing we pointed out in our commentary.

Limbaugh seems to have barely skimmed the article he’s referencing, as he attributes Ghosh’s sentiment to Mediaite’s writer (me). To catch you up, here’s what Ghosh said:

GHOSH: The thing to keep in mind that`s very important here is that the Koran to Muslims, it is not — it is not the same as the Bible to Christians.

That makes it sacred in a way that it`s hard to understand if you`re not Muslim. So the act of burning a Koran is much more — potentially much, much more inflammatory than –

And here’s some of what Mediaite’s writer (me) said:

Ghosh’s statement is not only based on a faulty understanding of Christian beliefs, but its very premise is patently offensive. Both the Qu’ran and the Bible were physically written by men, and are believed, by their adherents, to be the divinely inspired word of God. I don’t really have a dog in this fight, I’d be much more upset if someone burned a copy of Slaughterhouse Five, but I know enough about Christianity to be offended for them.

Somehow, Rush got all confused, and thought he was disagreeing with me. I know, I never expected it to happen either, but I can still comprehend english, be it spoken or written. For example, he says “Whoever wrote this obviously hasn’t ever gone to Sunday school.”

If only Rush had some way of verifying that. Like this:

Personally, I believe in an America where the freedom to burn its flag is the surest sign that she can survive anything, but especially some loser’s Zippo lighter. As an atheist-leaning agnostic who was raised in an Evangelical church, I’m sure that my former Brethren have the same faith in the Bible’s ability to withstand such an immolation. The same can probably be said of the vast majority of Muslims, as well, regarding the Qu’ran.

Remarkably, in his unjust lashing out, Limbaugh actually made another great point, that Islamic terrorists have burned many more Qu’rans, by bombing mosques in sectarian conflicts, than Pastor Terry Jones could even make a dent in:

To his credit, Limbaugh did get our name right this time.

To add insult to injury, Limbaugh brings up the story of the US Army burning Bibles in Afghanistan in 2009, and guess who else was against that?

Still, did they have to burn them?I mean, it’s not like with flags, is it? There doesn’t seem to be a right way to destroy a Bible.

Brody’s point is well taken. Couldn’t the Army have sold the Bibles to a local bookstore?

While I am firmly in the camp that says religion has intruded too far into government (as evidenced by the brouhaha surrounding the President’s speech at a merely tangentially religious institution), I also think religious texts ought to be respected, even if their owners don’t always extend that respect to others.

Normally, this is the place where an indignant writer will demand an apology, and a correction, but I wasn’t even sure I wanted to point this out. Getting slammed by Rush Limbaugh is every good liberal’s dream, and I’m a little annoyed that I don’t get to enjoy it this time. As such, I demand that Limbaugh select 5 of my stories at random, and completely take them apart. But whatever happens, Rush, please don’t apologize. It’ll ruin me.