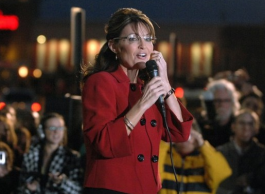 Last night the NAACP unanimously passed a resolution condemning what it terms “”racist elements” in the Tea Party movement and issued this challenge to the Tea Party:”You must expel the bigots and racists in your ranks or take full responsibility for all of their actions.”

Needless to say this news did not go over well with Tea Party members who turned around and accused the NAACP of being the racists. Said Mark Williams, a national spokesman for the Tea Party Express. “You’re dealing with people who are professional race baiters, who make a very good living off this kind of thing. They make more money off of race than any slave trader ever. It’s time groups like the NAACP went to the trash heap of history where they belong with all the other vile racist groups that emerged in our history.”

Not one to let a political hot potato lie, Sarah Palin jumped directly into the mix with a long Facebook missive last night — complete with the required Reagan references — slamming the NAACP’s (admittedly bizarre) decision. Truth be told, it’s not a bad read. Though the underlying message seems to be ‘et tu Obama?’

I am saddened by the NAACP’s claim that patriotic Americans who stand up for the United States of America’s Constitutional rights are somehow “racists.” The charge that Tea Party Americans judge people by the color of their skin is false, appalling, and is a regressive and diversionary tactic to change the subject at hand.

President Reagan called America’s past racism “a legacy of evil” against which we have seen the long struggle of minority citizens for equal rights…His words rang especially true in the immediate aftermath of the 2008 presidential election. It seemed that with the election of our first black president, our country had become a new “post-racial” society. As one writer in the Washington Post stated: “[Barack Obama’s] election isn’t just about a black president. It’s about a new America. The days of confrontational identity politics have come to an end.”

We, as a united people, applauded that sentiment. We were proud of that progress. That’s why it is so sad to see that 18 months later, the NAACP is once again using the divisive language of the past to unfairly accuse the Tea Party movement of harboring “racist elements.”

It goes on. One thing is clear, she is quite happy to own this issue.