Sarah Palin Is Corrupting The Quality Of National Politics
soundbite

Sarah Palin Is Corrupting The Quality Of National Politics 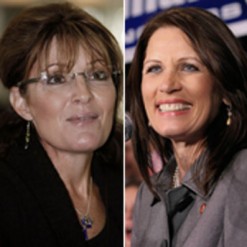 Their superstardom is a very bad development, even though there is no reason to believe either is ever going to be elected to a position where they could do serious damage. (If Sarah Palin was seriously planning a presidential run, do you think she’d have agreed to be speaker-for-hire at the Wine and Spirits Wholesalers of America Convention at Caesars Palace in Las Vegas this week?)

The problem is that they’re all wow and no substance. Palin is living proof that you can be popular without having to try very hard. It appears she’s never going to respond to all the pundits who urged her to go back to Alaska and read up on current events. And Bachmann’s fame has increased by leaps and bounds despite the fact that she, um, makes stuff up.

Gail Collins of the New York Times weighs in on last week’s joint Sarah Palin/Michelle Bachmann rally and the larger ramifications of the Palin ‘wow’ factor. Collins, who has published two (excellent) books tracing the history of American women from the Mayflower to present day, says that after Hillary transformed herself in order to win the New York Senate seat “some of us hoped that it might be the beginning of a new era…Maybe some of the next generation would also have a wow factor.” Instead what the public got was simply the wow factor with no substance, namely Sarah Palin.

Collins’ larger concern, however, is that Palin is setting a bad example: “Ambitious pols who have never once been mentioned in a presidential interview, or brought a shrieking crowd to its feet, must be looking for a way to get into the act.” And Palin, argues Collins, has demonstrated that the quickest way to do so is to “act a little nutty.”

As much as I enjoy and admire Collins I think it is perhaps a little unfair to blame Palin exclusively for all this nuttiness. The insatiable blogosphere and a media industry desperate for the traffic (ie ad dollars) that generally follows nutty headlines is at least as culpable for the current tone as Palin…if not more so. As to Palin’s wow factor, well you can’t argue with that, Palin is very wowy. And whether you want to admit it or not, she made a few cracks of her own in the glass ceiling. The (at this point desperate) hope going forward is obviously that the next serious female politician to emerge on the scene will have the substance to match the wow.