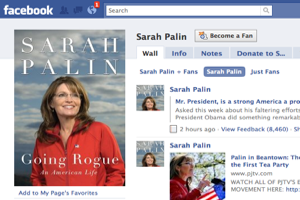 Sarah Palin is back on her Facebook page (arguably the most newsworthy Facebook page of all time), this time calling out Barack Obama for reminding 47 foreign leaders that America could still turn their nations into a pile of ash 30 times over. This behavior is not hawkish enough, she argues, and threatens the health of “American exceptionalism.” 6,754 people like this post!

How Palin’s Facebook became the most influential policy blog in America remains a mystery, but it keeps throwing grenades into the national public discourse at a record pace. While her indictment of Obama’s “whether we like it or not comment” is not exactly new, she has now rejuvenated the issue and made it prominent to an entirely new set of actors. The comments on this post alone proves she is one of– if the not– most powerful blogger in America.

So why is the most powerful blogger in America willingly tethered to a frivolous social media site? Perhaps she’s trying to avoid being branded a member of that “media elite” that she loves to hate so much, though someone whose only employ is to make television appearances and write posts on national policy sure sounds like a member of the media to me.

Read her full analysis of the Obama administration’s diplomatic philosophy below:

Asked this week about his faltering efforts to advance the Middle East peace process, President Obama did something remarkable. In front of some 47 foreign leaders and hundreds of reporters from all over the world, President Obama said that “whether we like it or not, we remain a dominant military superpower.”

Whether we like it or not? Most Americans do like it. America’s military may be one of the greatest forces for good the world has ever seen, liberating countless millions from tyranny, slavery, and oppression over the last 234 years. As a dominant superpower, the United States has won wars hot and cold; our military has advanced the cause of freedom in Iraq and Afghanistan and kept authoritarian powers like Russian and China in check.

It is in America’s and the world’s interests for our country to remain a dominant military superpower, but under our great country’s new leadership that dominance seems to be slipping away. President Obama has ended production of the F-22, the most advanced fighter jet this country has ever built. He’s gutted our missile defense program by eliminating shield resources in strategic places including Alaska. And he’s ended the program to build a new generation of nuclear weapons that would have ensured the reliability of our nuclear deterrent well into the future. All this is in the context of the country’s unsustainable debt that could further limit defense spending. As one defense expert recently explained:

The president is looking to eliminate the last vestiges of the Reagan-era buildup. Once the wars in Iraq and Afghanistan are “ended” (not “won”), the arms control treaties signed, and defense budgets held at historic lows while social entitlements and debt service rise to near-European levels, the era of American superpower will have passed.

The truth is this: by his actions we see a president who seems to be much more comfortable with an American military that isn’t quite so dominant and who feels the need to apologize for America when he travels overseas. Could it be a lack of faith in American exceptionalism? The fact is that America and our allies are safer when we are a dominant military superpower – whether President Obama likes it or not.