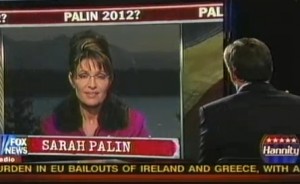 While Palin correctly points out that the national media should not have exploited the musings of a 16 year-old, the balance of her response reveals important things about Sarah Palin, not as a parent, but as a media critic and human being. Not only does she undermine her claims of media “lies” by making stuff up herself, she also displays a disturbing attitude about the use of the word “faggot.”

Palin is absolutely correct that the children of politicians ought to be off-limits to the media, or at least, that there ought to be a high bar set for newsworthiness. Similarly, Palin’s skill as a parent should not be considered fair game. Neither subject has any relevance to Palin’s career as a politician, or as a media figure, and decency dictates that they remain private.

What is relevant, though, is how Palin chose to respond to the incident. Here’s the clip of Palin’s interview with Sean Hannity, including the completely unrelated question that Hannity asked her: (from Fox News Channel)

Here’s a transcript of the relevant portion:

People probably think that my greatest frustration is the lies that are told in the tabloids and on hateful blogs full of anonymous sources about my family … and there are constant everyday lies that we have to read that are out there in the public. But my family and I…thick skin…we can take it, you know…we can take what the haters say despite the fact that there’s injustice in the situation.

I mean, look at the other day. Willow, finally, my 16 year old, she had had it up to here with somebody saying very, very hateful things about the family and saying mean things about her little brother Trig, and Willow finally responded and she used a bad word when she responded in defense of her family. And her response became national news, even hard news copy it turned into, so that’s ridiculous and I had to explain to her, “Willow, there is no justice here but you have to just zip your lip and let’s move forward.”

Perhaps most glaring is the fact that, in an interview in which she promises to restore journalism, Palin gets her facts wrong. The exchange to which she refers contains nary a mention of Trig Palin, and was touched off by a single negative comment about Palin’s reality show, Sarah Palin’s Alaska. Palin would have been perfectly justified had she chosen not to get into the details of the story, but since she did, she ought to have described them accurately.

More disturbing, though, is Palin’s complete dismissal of the use of the slur “faggot.” From her response, it’s not even clear that she identifies it as a “bad word,” since the conversation she references contains a barrage of obscenities. In any case, she clearly felt that the use of the word (or words) was justified, and that the only “injustice” was that anyone objected to it.

This is consistent with the Sarah Palin who defended Dr. Laura Schlessinger over her use of the “N-word,” but not so much with the Palin who demanded Rahm Emanuel‘s firing over his private use of the word “retard.” Perhaps this would be a different story if Palin had a “faggot” child of her own, or even a “normal” child who couldn’t live with the stigma that society still attaches to the label.

That’s really the crux of the problem with Palin. Many liberals would probably use these seeming contradictions to charge Palin with hypocrisy, a clichéd, overused accusation that misses the real takeaway. Palin is not a hypocrite. She obviously believes that certain groups are worthy of sensitivity, and is entirely consistent in extending that worthiness only to those folks she can see from her own house.