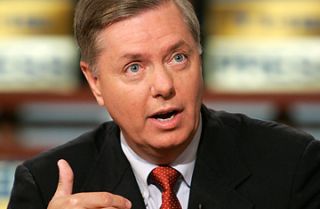 South Carolina Republican Senator Lindsey Graham spoke with Kilmeade and Friends today about the McConnell-Reid debt plan and, well. He didn’t seem terribly optimistic about the chances a debt deal will be reached by August 2nd.

Graham effectively told host Brian Kilmeade that the plan was dead, noting that “any plan that allows you to borrow $2 trillion and you only cut 1.4 doesn’t have a chance of passing.”

He continued, pointing out that individuals on either side of the aisle haven’t learned from the past when it comes to presenting solutions for the future:

Kilmeade: Are you predicting an agreement before the 22nd of July, which they say is the framework time, and for details to be worked out by August 2nd?

Kilmeade: Are you also saying Republicans too…have also not learned lessons of 2010?

Graham: If you propose a solution to this problem that allows debt to increase and grow the national debt, then you have not been listening to what’s been going on the last couple of years. My belief is that no Republican can go back home and sell a plan that raised the debt ceiling that didn’t cut the government at least dollar for dollar.

Have a listen, courtesy of Kilmeade and Friends: