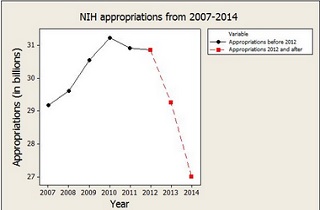 On Wednesday, Senate Majority Leader Harry Reid (D-NV) lashed out at CNN reporter Dana Bash over her question about children who are unable to enter clinical trials due to the government shutdown. Republicans are trying to selectively fund the National Institutes of Health in order to avoid the political consequences of their government shutdown, according to Democrats. Their recent budgets agree.

Senator Reid objected to Bash’s questions, calling her “irresponsible and reckless” for asking if the Senate would pass a bill that only funds the NIH, and if not, “aren’t you playing the same political games that Republicans are?”

To be clear, the Republicans are scrambling to restore funding that they cut off, and which would immediately be restored if they passed a clean continuing budget resolution. Bash’s attempt to spread the blame is part of a consistent effort by the media to support their “both sides” narrative.

But in case anyone is still convinced by the Republicans’ sudden concern for NIH funding, they ought to consider this, from the Government Affairs Blog:

House of Representatives Budget Chairman, Paul Ryan (R-WI), released a 10-year spending plan on Tuesday. The plan claims to balance the federal budget within the next 10 years, through deep cuts of roughly $4.6 trillion, which is more than the entire federal budget for FY 2012. The plan imposes extreme cuts to non-defense discretionary programs, which include line-items such as the National Institutes of Health (NIH), Head Start, education, and air traffic control. These cuts will take place by imposing a 414-billion-dollar cap on non-defense discretionary spending for FY 2014, which starts on October 1st. To put this into perspective, this cap means that about $167 billion will be cut from these programs in FY 2014, accounting for the sequester cuts that took effect on March 1st. While the sequester cuts have dealt a devastating 5.1% cut to NIH funding for the remainder of this year, the House plan could mean more than a 10% cut to the NIH budget in FY 2014. The graph on the right shows the deep cuts to NIH for FY 2013 after the sequester, and the cuts that will take place for FY 2014 if Rep. Ryan’s budget is adopted. 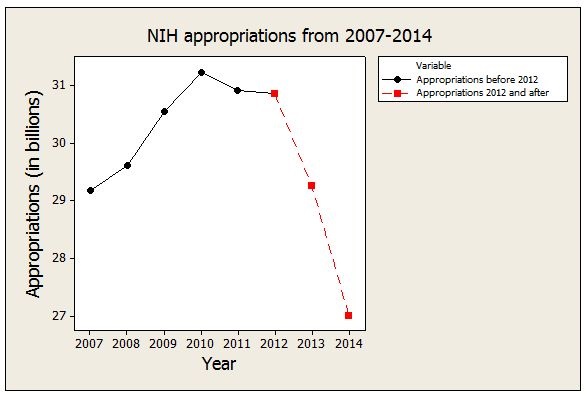 President Obama, on the other hand, calls for increased funding for NIH, although not much:

Today, President Obama released his much anticipated budget request for Fiscal Year 2014. The President’s Budget Request (PBR) contained $31.1 billion for the National Institutes of Health or a 1.5% increase over the Fiscal Year 2012 level. The administration uses FY12 as a baseline, given that the FY13 budget was set at the FY12 level for the entire year. Reductions of roughly 5.1% will be taken from the FY12/FY13 budget level in most cases. The PBR largely ignores sequestration, as most numbers provided for FY13 are at the pre-sequestration level. In the administration’s funding plan, the National Institute of Dental and Craniofacial Research is provided $411.5 million or 0.4% more than the FY12 level. The PBR states that it will support 9,400 new and competing grants, an increase of roughly 8%. The increase will be funded largely by reducing continuation awards by 1%, reducing inflationary increases to grants, and reducing the size of awards.

The President’s low funding request is likely another example of his willingness to respond to pressure from the media to meet Republicans halfway, but when you see where the Republicans are starting out, that narrative quickly dissolves, and so does GOP outrage at their own shutdown’s effect on the NIH.