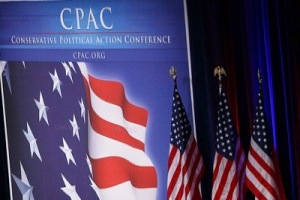 After tensions came to a boiling point last year when a speaker was booed off stage for preaching against gays in his speech, several conservative groups are planning to boycott this years Conservative Political Action Committee over the inclusion of gay conservative groups at the conference, including the Family Research Council and the Heritage Foundation. But not all conservatives are upset with the move– Andrew Breitbart, for one, is throwing a party.

The Family Research Council, Heritage Foundation, and American Family Association have canceled their tickets to CPAC– by far one of the largest conventions of its sort in the nation– this year, the LA Times reports, over the increased inclusion of gay conservative groups like GOProud and other socially liberal and libertarian organizations. CPAC also refused to sponsor a panel on the virtues of male-female marriage, much to these groups’ chagrin. According to the Times, Family Research Council president Tony Perkins explained to supporters in an email about their withdrawal from the event that “conservatives and homosexuals cannot coexist in a movement predicated on social values,” and as such their group no longer had a place in CPAC. Meanwhile, Heritage Foundation vice president for communications Mike Gonzales told the newspaper that, when it comes to  conservative values, “you can’t pick one and not the other,” referring to economic and social values.

The offending groups, meanwhile, seem to be taking it in stride, particularly GOProud, the gay conservative group which has been invited to CPAC twice in its two-year existence and reports to have grown since then to a whopping 10,000 members. CPAC organizers, meanwhile, responded that, while lamentable, they were not willing to exclude gay conservative groups to appease the socially conservative factions offended, and the conference is expected to attract a good 10,000 attendees anyway, among them CPAC 2010 MVP Andrew Breitbart, who seems to be planning to enter this year’s event with a more peaceful disposition:

“The point is to welcome people into the ‘big tent,’ ” Breitbart said Friday. Last week, Breitbart tweeted that he planned to throw a party for gay conservatives at CPAC.