Social Liberalism In The Midst Of A String Of Stunning Defeats

Social Liberalism In The Midst Of A String Of Stunning Defeats 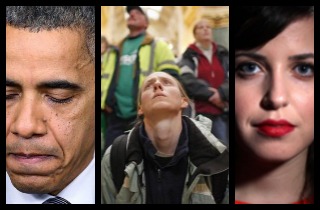 April has not been kind to those who subscribe to the tenets of cultural and social liberalism. The advocates of progressivism in American life have suffered two defeats in recent weeks – one fight they sought but the other was unforeseen. The trial of Kermit Gosnell has forced the media and the public to ask themselves some disturbing questions about the nation’s abortion laws and the disdainful treatment of pro-life ideas and advocates by the press. Similarly, gun control advocates suffered a dramatic defeat yesterday at the hands of the country’s elected representatives. Neither of these events had to unfold in the way they did. Convinced of the righteousness of their cause, social progressives have for some time failed to engage their critics as honest brokers. Absolutist social liberals have made a virtue of dismissing their opponents as uncaring or unthinking brutes. This conceit led to some stunning defeats with as yet untold repercussions.

The revelation that the political news media had not pursued the Gosnell case in the same way it pursued other “local crime stories” which many in the press implied were indicative of a larger societal problem; the shooting of Trayvon Martin or 2012’s mass shootings in Colorado and Connecticut, to name some recent examples. This admission that the press had abdicated its job provoked a level of introspection in the media that is virtually unprecedented.

Pro-choice writers issued mea culpas for their lack of coverage. Some wondered in print if they overlooked the story because of their own biases or because their social and professional circles simply are not interested in reports that ultimately lead to discomforting conclusions about some abortion practices.

“I understand why my readers suspect me, and other pro-choice mainstream journalists, of being selective — of not wanting to cover the story because it showcased the ugliest possibilities of abortion rights,” wrote The Daily Beast columnist Megan McArdle. “The truth is that most of us tend to be less interested in sick-making stories — if the sick-making was done by ‘our side.'”

“There is a bubble,” acknowledged Slate columnist Dave Weigel. “Let’s just state the obvious: National political reporters are, by and large, socially liberal. We are more likely to know a gay couple than to know someone who owns an ‘assault weapon.’ We are, generally, pro-choice. Twice, in D.C., I’ve caused a friend to literally leave a conversation and freeze me out for a day or so because I suggested that the Stupak Amendment and the Hyde Amendment made sense.”

Beyond the media, the Gosnell case has transcended the filter on information which the press jealously guards and has percolated into the national consciousness. The public, largely comfortable with the notion of “safe, legal, and rare,” must now confront the idea that some abortion practices in this country may be none of the above.

Not all in the media are willing to ask themselves the tough questions. Salon’s Irin Carmon has called into question the Democratic credentials of The Daily Beast columnist Kirsten Powers who so effectively shamed the media into covering the Gosnell case. She added that the Gosnell case, almost certainly an outlier, deserves as much coverage as the relatively high fatality rate for African-American women due to pregnancy. Those alleging a media cover-up of the Gosnell case “just want all reproductive freedom curtailed,” she writes.

Carmon raises valid points, but she is also shifting the terms of the debate. After failing to effectively justify the media’s silence on Gosnell last week, it is doubtful she will derail the debate about late-term abortion this week. For a nation which has been rapidly trending away from calling itself “pro-choice” over the last 20 years, the Gosnell case has focused the minds of many who would prefer not to face the gruesome realities of abortion after the first trimester. This is not evidence of a trend towards religiosity in America – data suggests the nation is turning away from organized religion. It is a trend in America towards libertarianism. The protection and preservation of an individual’s “right to life” has become a winning argument — emphasis on the word “right.”

This defeat – and it is a defeat – for one of social liberalism’s most sacred cows is compounded this week by the failure of the Senate to pass even a modest tightening of the nation’s gun laws. After four months of campaigning on the issue of gun control by the Democratic political establishment and by their allies in the media in the wake of the Newtown massacre, Republicans and red-state Democrats joined together to kill the token modification to the background checks for gun purchasers. This development was greeted with shock by gun control proponents, but it was a foreseeable development.

“Do we really think thousands of families whose lives have been shattered by gun violence don’t have a right to weigh in on this issue? Do we think their emotions and loss is not relevant to this debate?” President Barack Obama asked rhetorically during his post-vote berating of all of Washington D.C.

But Obama intentionally conflated reasoned opposition with cowed obedience to entrenched interests. The endlessly compassionate American people and their Congressional representatives did not cede their logic to their emotions on the issue of gun ownership, but gun control advocates steadfastly refused to accept that their opponents had a legitimate counterargument.

Further, gun control backers refused to reconcile a discrepancy in public polling which showed some proposed new gun laws to be wildly popular in the same way that the fundamental right to own a firearm remains wildly popular.

During the height of the debate over the Affordable Care Act, the law’s supporters dismissed the unpopularity of healthcare reform by identifying particular provisions within the bill that polled well. They said that the bill’s unpopularity would fade away as those popular provisions began to take effect. Of course, that day never came.

In this same way, gun control advocates are fooling themselves. A backlash against those Senators who struck down new gun laws in spite of their popularity is unlikely to materialize. Gun control supporters presumed that their opponents were animated by base or disingenuous motives. In doing so, they failed to make a convincing case for their cause.

Gun control advocates fail to acknowledge that, in spite of their callousness in the wake of the Newtown massacre, the unending campaign of demonization aimed at the National Rifle Association failed to make the group or their issue advocacy toxic. It was most certainly not because of the NRA’s actions after Newtown, but rather the popularity of the right they see it as their mission to protect – a right enshrined in the U.S. Constitution. By dismissing this, the nation’s gun control advocates were probably doomed from the start. They never framed their argument in terms of freedom, and a message of liberty almost always carries the day.

These two defeats are not insignificant. The nation’s Democrats seem willing to continue to stoke the notion among their supporters that they are the victims of a moneyed few. They will continue to approach their donors with the promise that they will make no compromise in the face of popular opposition. They will fight back, Democratic and progressive politicians will claim, against a secretive cabal that has thwarted the will of the public. Those promises will delude some and may raise a hefty sum in the process, but the victory they promise is unlikely to arrive.

So long as they refuse to ask themselves why they have sustained two dramatic defeats with repercussions that cannot yet be fully comprehended, cultural liberalism will not alter how they approach the public debate. If this remains the case, it is likely that the chasm of opinion separating liberalism’s champions from the public they seek to represent will grow ever wider.