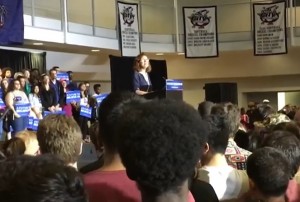 To quote Ronald Reagan, there you go again, Susan Sarandon. Competing for the title of Bernie Sanders‘ most deranged Hillary Clinton attack dog, Sarandon has already suggested that a Donald Trump presidency might be preferable to Hillary winning the White House, called her a liar, and even come out against a Chelsea Clinton presidency. At a rally in Philadelphia Monday night, Sarandon was at it again, attacking Hillary with a vicious quote that carried special power because of the identity of the person she claimed to be quoting:

This is such an important election, I just wanted to read you this, a little something about Hillary Rodham Clinton. “HRC is driven by politics, not conviction. From the war, to NAFTA, to Social Security, to her choice of baseball teams, Clinton is constantly shifting, dodging and changing positions to satisfy the politics of the moment. Her penchant for secrecy and non-disclosure reflect an underlying disdain for the ‘invisible’ people for whom she claims to speak.”

This was spoken by Barack Obama in 2008. So as we can see, the only thing consistent about Hillary Clinton is her inconsistency.

The quote is real, and Sarandon quotes it accurately, but it wasn’t from 2008, it was from 2007, but more importantly, it wasn’t “spoken by Barack Obama.”

That quote is from an internal memo that was compiled by then-Senator Barack Obama‘s presidential campaign, and was not made public until a few months ago. Now, I can already see the emails I’m going to get from my Bernie Sanders-supporting friends asking me how DARE I call Susan Sarandon a liar over such a “technicality” (you know who you are), I will explain the enormous difference, even though it is obvious.

A quote directly from Barack Obama slamming Hillary like this would carry a lot more weight with an undecided Democrat than one from an internal attack memo that was never intended to be made public, and was never actually used by the candidate. Much of Hillary’s appeal to Democrats is the way she has steadfastly campaigned on the Obama legacy, and her relationship with him. More to the point, though, if it’s such a technicality, why lie about it, as Sanders and his campaign staff and surrogates have done time and again?

Both of these candidates have attacked each other in ways that are distasteful, but typically, Hillary Clinton and her campaign will state something accurately, then make an absurd characterization of that, like blaming Vermont for gun crime in New York City, or that moving to single payer would be “starting all over again.”

Arguments like these can be seen as dishonest or misleading, but at least they can be evaluated on their merits. If someone’s pissing on you, you can decide that it’s not raining. Beginning with a lie, though, is different, because it poisons everything that comes after it. In Bernie Sanders’ case, it also risks damaging one of the most important keys to his appeal, his honesty and integrity.