Syrian Government Reveals They Are Incompetent At Photoshopping Government Imagery 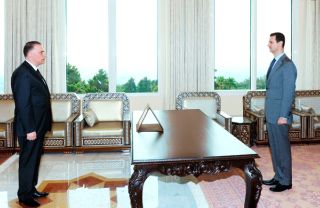 Take a good look at this photo, ostensibly of Syrian president Bashar al-Assad swearing in the new governor of Hama, Anas Abdul-Razzaq Naem. Notice anything… off? For one, the men don’t seem to be quite across from one another, leaving each staring off into the distance, perhaps with longing, perhaps with hope, perhaps so as not to look at those incredibly gauche chairs in the background.

The Guardian enlisted the help of imagining expert David McCoy to determine whether the image was doctored in some way. McCoy guesses the photo shows two images merged together to make it appear as if both men are in the same room at the same time, leaving one positioned slightly higher than the other. And there’s more:

This becomes clearer when you look closely at the floor, which is distorted. The right hand side of the picture has been stretched downwards into place to line up with the left side (which is not distorted).

McCoy says it is also suspicious that the two men are not looking directly at one another. “Assad [right] appears to have had the edge detail on his hair smoothed out, in contrast to the harsh, overly sharpened edges visible elsewhere on his body,” McCoy says.

Of course, it’s not as if this is anything new. Earlier this year, it was discovered that Egyptian authorities had similarly doctored an image of then-President Hosni Mubarak walking with other world leaders, including Barack Obama, Benjamin Netanyahu and Mahmoud Abba to place Mubarak in front of the procession — practically hip-checking Obama — instead of trailing behind, as in the original photo. Then there’s the picture of three Chinese officials seemingly levitating whilst “inspecting” a road. They just don’t teach that sort of thing in American schools.

And who can forget the former Soviet Union’s history of removing undesirables from photographs, as if they had never existed. And even they did a better job of it than whatever Syrian government official was tasked with learning Photoshop in a hurry. 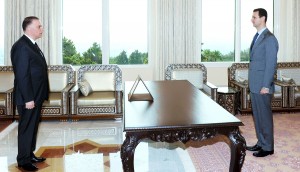 h/t The Guardian via Gawker