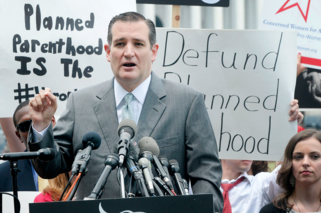 GOP presidential candidate Ted Cruz has a habit of bringing up abortion all the time, even when it has nothing to do with what he is talking about. When President Barack Obama declared he wanted to leave an empty seat at the State of the Union for gun violence victims, Cruz piped up that if he were president, he would leave a seat open for all the aborted fetuses of America. (When asked about abortion outright, though, he sometimes wavers and doesn’t say anything.)

Cruz is back at it again with the non-sequitur abortion arguments and this time, he’s fighting against his senatorial colleagues. Tennessee’s Bob Corker has sponsored a bill called the End Modern Slavery Initiative, which has been proposed two years after Boko Haram kidnapped hundreds of Nigerian girls. Reportedly, the girls have been being used for terrible things against their will. Per Wonkette, Corker’s plan would be a way for the United States to partner with other major countries and NGOs to fight sex slavery and other types of slavery, all without requiring America to form its own governmental agency. The U.S. would contribute $250 million, with other entities contributing $1.25 billion, and some major progress would likely be made with all the countries working in conjunction.

Cruz does not want to work in conjunction. Here is his reasoning for dragging his feet on this bill, via Time:

A Cruz spokesman says the Senator supports the goal of ending modern slavery and human trafficking but “he has some concerns with the EMSI bill, specifically whether it does enough to ensure that the foundation created by the bill would not be able to fund organizations that provide or support abortions.”

Ah, yes. Conditions like this exist elsewhere throughout American aid policies. The Helms Amendment does this already with regards to American assistance money, which cannot be used to encourage or perform abortions. A number of groups have spoken out against Helms, as have Bernie Sanders and Hillary Clinton, because it has been interpreted to mean that abortion can’t even be mentioned as an option to a patient whose pregnancy is the result of rape or incest or is life-threatening.

Cruz wants to be sure that Corker’s bill, which would help innumerable enslaved women and children worldwide, will include specific regulations that ensure organizations that even “support abortions” won’t be allowed to join in. As Wonkette pointed out, this is especially strange because, as stated, the United States won’t have its own agency created for or assigned to the implementation of the efforts outlined in the EMSI bill. Cruz, then, is afraid that one of the affiliated countries or organizations may contribute money that could somehow be given to an organization that supports abortion. Given that the bill aims to aid victims of child sex trafficking, it is likely that abortion services will at least be discussed, as there will almost certainly be a number of pregnant children involved.

And so, we are at a stalemate, which even Time is confused about, since they pointed out that organizations like the National Right to Life have no issue with the EMSI bill. Here’s Corker on the subject:

This fund is being established to free slaves, both in sexual servitude and forced labor, and prosecute their captors. The legislation does not provide for abortion and has no pro-life issues. It would seem that those claiming otherwise either haven’t read the current version of the legislation or have other reasons for trying to kill a bill focused on rescuing over 27 million women, children and men enslaved today around the world.

Ted Cruz’s one-man crusade against all sorts of sex-related stuff continues. (This isn’t the first thing he’s done all by himself, either.)