One week ago, as candidates for office in California, Maine, Virginia and several other states were in the midst of a last-minute push to get voters to the polls, it’s safe to say that Alvin Greene wasn’t. The nominee of the South Carolina Democratic Party for the United States Senate says that he “worked hard” during his campaign – despite all evidence demonstrating the opposite. He won by 17 percentage points, took 42 of 46 counties, garnered over 100,000 votes. Yet no one has turned up a single TV ad, radio spot, piece of mail in which Mr. Greene presents himself to the voting public – just one lonely flyer in the possession of the candidate. 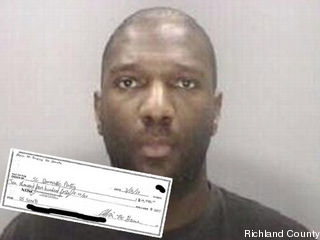 Even more bizarre are the circumstances under which Greene came to be on the ballot. An unemployed veteran, he showed up at Democratic party headquarters in the state’s capital holding a $10,440 check drawn from his personal account. When told that he needed to pay from a campaign account, he left, returning a few hours later with a new check, identified as being from “Alvin M. Greene for Senate” in his own handwriting. This from a man who, the Associated Press revealed, is being represented by a public defender on felony charges following an arrest last November.

Something seems off. May be it’s the human tendency to seek patterns and explanations in things that happen, but theories are running rampant on the Internet – among them, that Greene’s a Republican plant, or that Republican voters in an open primary voted him into office, or that Greene is a guy with outsized ambitions who got (un-)lucky. As befits the situation, no single theory neatly answers every question.

Greene is a Republican plant.

This is the leading theory, advanced, among others, by House Majority Whip James Clyburn. Greene, the theory goes, was given the $10,400 by the Republican party to run against Vic Rawl, a former judge and Charleston City Councilmember. (Some theories speculate that Greene himself is a Republican, something he consistently denies.)

The rationale for doing this is murky. It is not atypical for political parties to find opponents for candidates they consider a threat. If the Republican party of South Carolina were worried about Rawl’s chances against their guy, incumbent Jim DeMint, they might want to give him something to fight in a primary. With the admitted benefit of hindsight, Rawl appears to be no such threat. He won his home county of Charleston by only 7% over Greene – not a good sign that he has the name recognition even in his hometown to take out DeMint and his national profile. Additionally, parties would normally seek out a candidate that could mount a real challenge – not just try to get someone on the ballot.

The strongest evidence that Greene was enticed to be on the ballot is that $10,440 check. Greene insists that the money is his, savings from his time in the Army. (The details of his “involuntary but honorable” discharge from the military are also shrouded in mystery.) If that’s so, he was nonetheless able to demonstrate to the state that he lacked financial resources for a private attorney in the matter of his arrest.

Greene’s hometown of Manning, SC, is over an hour away from the Party building in Columbia. If Greene is to be believed, he drove from Manning to Columbia, walked in to register as a candidate, was turned away because of the type of account the check was drawn on, went to a nearby branch of the National Bank of South Carolina (the closest of which was half a mile away), opened a new account, got a new check, and went back and filed within a few hours. He had with him, in his car, all of the paperwork he needed to open that business account, allowing him to open it quickly.

Greene was the beneficiary of uninformed voters – or conniving ones.

The Week presents a great summary of six theories of how Greene won. Each is easily dismissed.

One omitted from The Week‘s list has some staying power. Featured (among other places) on Countdown with Keith Olbermann, this theory is that Republicans, voting in an open primary that allowed voters to vote for a candidate of either party, voted to submarine Rawl’s chances at a win.

There are two big problems with this theory. First, such a strategy would require either a coordinated effort by the Republican party (the kind of effort that leaves a lot of fingerprints) – or an awful lot of Machiavellian South Carolina voters. Neither seems likely.

The other problem is that the numbers don’t support it. South Carolina’s State Election Commission provides numbers from Election Day. If Republican voters were crossing party lines to vote against Rawl, that means that votes for DeMint, the Republican candidate, would suffer, since a voter can’t vote twice. It also means that one would expect to see more votes in the Democratic primary for Senate than the primary for Governor.

424,893 Republicans in South Carolina turned out to vote last Tuesday. 99.38% of them voted in the Gubernatorial contest (starring Nikki Haley, it was one of the most watched in the nation). In the Senate primary, 97.12% of Republicans also voted – a difference of only 2.26%. In terms of actual votes, the difference was 9,593 – fewer than 10,000 people voted for Governor but not Senator on the Republican ticket. This is well within what might be expected – DeMint was expected to walk to victory (and did) – something that always reduces interest.

On the Democratic side, 197,380 registered Democrats voted, with 86.24% of them voting in the Senatorial primary – a lower percentage, that is, than in the Republican primary. It was lower, in fact, than the percent that voted for a gubernatorial candidate; in that race, 95.93% of Democratic voters voted. Even if those 9,593 Republicans had crossed party lines to vote for Greene, he still won by over 30,000 votes – so it wouldn’t have made a difference. 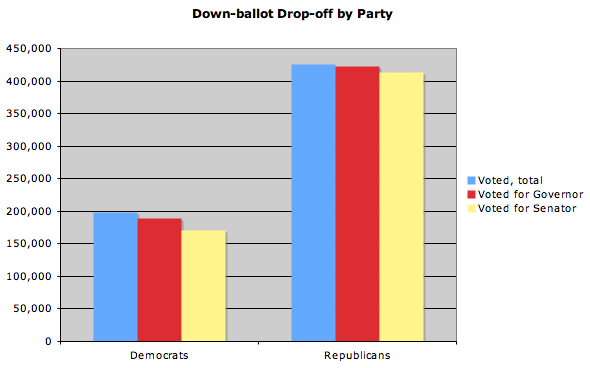 (All of these numbers assume that people voted along party lines, but assuming cross-overs would make the point stronger, not weaker. If a large number of Republicans had voted in the Democratic Senate primary, it means a very large number of Democrats would have had to have voted in the Republican primary instead, which is even more unlikely.)

Elections are math problems. If X is larger than Y, you’ve got yourself a new President. Here, the numbers add up as one might expect, meaning that the open primary wasn’t a factor.

Greene got unlucky, and won

It’s difficult to argue that Greene is not a sympathetic figure. Soft-spoken, unfamiliar with having a public presence, much less public speaking, he’s being destroyed by much savvier interviewers eager to explore the boundaries of his discomfort. He’s a veteran of service in Iraq who is under heavy fire back at home. Questions – valid ones – have been raised about his mental capacity and emotional state. He’s in desperate enough financial straits that he asked an interviewer if he could be paid for talking. Even if he thought he’d run for Senate and ended up winning, as he claims, the aftermath of that chance occurrence has been blistering.

There’s a scenario under which Alvin M. Greene, in a fit of optimism, or of patriotism, or of democratic anger, drove the sixty miles to Columbia, and committed to running for the United States Senate. There’s another under which he is the unwitting actor in a poorly thought-out plot to subvert the will of South Carolina voters. A third posits that a man of limited capacity seized upon an unlikely ambition.

Which, we don’t know. And we might never find out.

Image of Greene with check from TPM.