The Daily Beast Reads Rep. Ron Paul’s New Book So You Don’t Have To 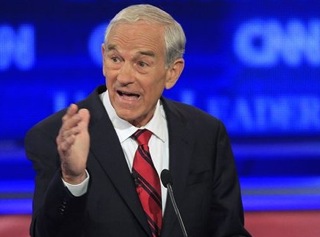 Known as an iconoclastic Congressman and serial presidential candidate, Rep. Ron Paul also has a lesser-known career as a prolific author. To understand more about the candidate, the Daily Beast‘s David Graham went through the 2012 hopeful’s latest tome, Liberty Defined, and came away concluding, perhaps unfairly, that Rep. Paul is not a “disciplined candidate” and, given his affinity for conspiracy, is a long way from the nomination.

Graham notes that Liberty Defined tackles fifty main themes, but squeezes the pulp out of the juiciest of them– sparing readers most of the anti-Federal Reserve rhetoric that has defined Rep. Paul’s career. Those arguments, for the most part, Graham narrates deviate little from what Rep. Paul argues on television and debates all the time. Nor does much of the book veer away from that, either, but Rep. Paul’s application of his well-known logic to more obscure political topics is what Graham argues gets him in trouble. For example, Rep. Paul’s passionate support for states’ rights over federal power leads him to reference the Civil War and argue the Constitution may require personal consent, like the mythical Social Contract:

A chapter on states’ rights turns into an argument for nullification, the long-discredited notion that states can nullify federal laws they oppose (in making his case, he mentions in passing that “the Civil War was fought to keep all states under the thumb of a powerful central government”—even though a chapter on slavery directly precedes it). Paul even flirts with the idea that the Constitution should apply only to those who personally consent to it; then he quickly moves on, writing, “Enforcing the Tenth Amendment is a big enough challenge to us for now.”

Graham also finds problematic that Rep. Paul does not believe in global warming, calling it “an unserious, intellectual luxury” that would lead the government to attempt to “plan weather patterns… the height of absurdity”– though that does not put him at odds with many conservatives– and that he argues stridently against “bipartisanship,” though rather than do so on partisan grounds, Rep. Paul repudiates both parties as having ideas that are too similar. Rep. Paul goes on to hope “that [both parties] will continue fighting and not pass any new legislation.”

Then there are the “conspiracy theories” and bargain bin of wacky side issues that do Rep. Paul in for Graham:

He praises Julian Assange and WikiLeaks several times; tosses in a chapter on Zionism that’s unlikely to gain him much praise in the current Israel-loving climate; says Texas’ decision to seek statehood was “probably a mistake”; eloquently speaks out against the death penalty; and mentions in passing that the Federal Reserve may be secretly financing the CIA—a claim that would raise eyebrows even if he supported it with evidence or a footnote, which he doesn’t.

While Graham does his best to merely aggregate the book’s most bizarre ideas, he does give away a few times that he does not quite grasp the political enclave Rep. Paul has been ruler of since his rise to prominence as a presidential candidate during his last term. For one, he calls Rep. Paul a “social conservative” for his stance on abortion– a difficult leash to tie around a candidate whose major contributions to the Republican debates so far is to make legalizing heroin a visible topic. He also chides Rep. Paul for his claims, adding that “disciplined candidates don’t do such things,” going on to include Rep. Michele Bachmann, albeit begrudgingly, as one of the “disciplined candidates.”

To Graham, many of Rep. Paul’s long-standing, honest, and deliberately publicized opinions come across as gaffes. That Graham equates Rep. Paul being open about his opinions to Rep. Paul being “undisciplined” says as much about the level of honesty America expects in their presidents as President Obama’s permanently “evolving” stance on same-sex marriage. That’s not to say that slyly hinting approval of a Texan secessionist movement and accusing the Federal Reserve of secretly funding the CIA while extolling the Constitution is a fast track to the White House (or logic), but counting Rep. Paul’s quirkiness against him is to miss the appeal of the “Ron Paul Revolution” in its entirety.

His fans embrace the fact that Rep. Paul is comfortable tossing out support to Julian Assange and calling climate change “absurd,” even when they don’t agree, because the alternative politicking and equivocating from the other candidates (with perhaps Herman Cain and Gary Johnson as exceptions) has become about as palatable as two-week-old Thanksgiving leftovers. And while it may not give him the power to win the nomination, it gives Rep. Paul the power to knock out other contenders– and possibly significantly divide the Republican/independent vote in 2012.