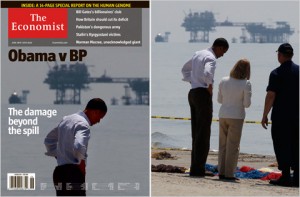 The Economist magazine’s June 19 issue features a dramatic “Obama v BP” cover. Standing at the coast, President Barack Obama is alone, head down, with the oil rig in the background. But it turns out, Obama wasn’t actually alone. Now, The Economist is getting criticism for a digitally altered cover.

According to the New York Times:

The unaltered image, shot on May 28 by a Reuters photographer, Larry Downing, shows Adm. Thad W. Allen of the Coast Guard and Charlotte Randolph, a local parish president, standing alongside the president. But in the image that appeared on The Economist’s cover, Admiral Allen and Ms. Randolph had been scrubbed out, replaced by the blue water of the Gulf of Mexico.

The magazine’s deputy editor, Emma Duncan, responded in defense of the cover, saying it was not altered to make a point, but rather, to focus on the president:

Yes, Charlotte Randolph was edited out of the image (Admiral Allen was removed by the crop). We removed her not to make a political point, but because the presence of an unknown woman would have been puzzling to readers.

I asked for Ms. Randolph to be removed because I wanted readers to focus on Mr. Obama, not because I wanted to make him look isolated. That wasn’t the point of the story. “The damage beyond the spill” referred to on the cover, and examined in the cover leader, was the damage not to Mr. Obama, but to business in America.

While the magazine did offer an explanation, it’s somewhat hard to believe the story had no intention to make the president look isolated when the headline and photo both seem to evoke the word “alone.”