The Facebook ‘Love’ Button is Finally Here, Now What?

The Facebook ‘Love’ Button is Finally Here, Now What? 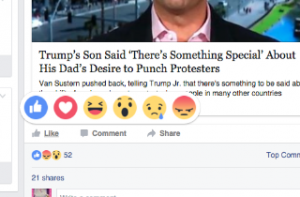 I was sitting here, minding my own business, when I heard our own senior editor and social media poster J.D. Durkin say, “Whoa! Facebook has a…’love’ button?”

Ever the intrepid journalist, I immediately clicked over to the ever-changing social media platform. Sure enough, when I hovered my cursor over the “like” button, a bunch of options popped up. (To achieve this on a mobile device, press and hold.) I found I could now like or love photos of people’s dogs or statuses about how much they hate the Kardashians. I also found I could click on various emojis to represent “haha,” “wow,” “sad,” and “mad.”

Per News Feed engineering manager Tom Alison, founder and chief officer Mark Zuckerberg wanted to give users more options when giving feedback to their peers. When a tragedy happens, it doesn’t feel right to “like” it, but it also doesn’t feel right to keep scrolling without offering any sort of e-acknowledgment.

It goes deeper than that, though. Product Manager Sammi Krug put it like this in a post called “News Feed FYI”:

Our goal with News Feed is to show you the stories that matter most to you. Initially, just as we do when someone likes a post, if someone uses a Reaction, we will infer they want to see more of that type of post. In the beginning, it won’t matter if someone likes, “wows” or “sads” a post — we will initially use any Reaction similar to a Like to infer that you want to see more of that type of content. Over time we hope to learn how the different Reactions should be weighted differently by News Feed to do a better job of showing everyone the stories they most want to see.

What’s next for the social media giant now that they’ve taken on politics, philanthropy, and the sum of all human emotion?

I don’t know. I’m too busy spamming my friends with “mad”s for no reason and stressing about what the unwritten social rules governing acceptable amounts of “love”s on selfies will be. How will you use these new tools of self-expression?