The Future Of Journalism? Unpaid Photoshoppers Have Weekly Op-Ed On FoxNews.com 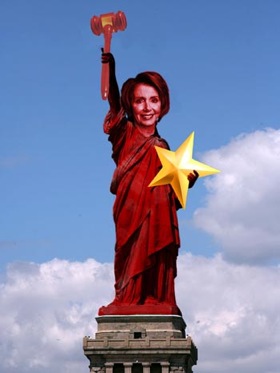 Fox News has responded repeatedly to accusations that they are “not a news network” by pointing to the distinction between their news and opinion sections. And if critics still doubt what actual opinion looks like on Fox, they should click on the FoxNews.com Opinion Page. That’s where the network really lets its (and, this week, Nancy Pelosi‘s!) hair down.

Today, the opinion section’s front-page news includes a “photo essay” of various user-generated artistic representations of Speaker Pelosi in relation to the passing of the health care bill. I’m sure you can already tell where this is going: Pelosi as an alien in the Jack Nicholson comedy Mars Attacks!, Barack Obama looking sharp as Robert Pattinson in Twilight, the obligatory Botox joke, etc.

Fox News has taken it upon themselves to dedicate a section to the insane doodles of its most fervent supporters when their legitimacy is constantly questioned by their peers, which on paper sounds like a terrible idea. Granted, no one at Fox News is getting a paycheck for photoshopping Nancy Pelosi’s head on an alien, so money isn’t directly being funneled into these sorts of Free Republic-esque shenanigans, nor are people affiliated with the channel aligning themselves directly with this level of discourse. But this slideshow isn’t an isolated incident: it’s part of a segment on the opinion page called “Your Turn,” where every week the network prompts readers to come up with innovative new doctored photo work on a certain topic. Next week’s, should you be inclined to participate: “Congress wants to control school lunches, New York City wants to put limits on salt and even Happy Meals are a target in one town. What will the ‘nanny state’ go after next?”

While it seems counter-intuitive for a network whose legitimacy is constantly under seige from its peers, Fox News exploits their viewers’ rage for eye-catching content for a very simple reason: free content that sells! In some ways, this is what Letters to the Editor look like in Web 2.0: quick, easy, hilariously angry political expressions that bring the page audience with minimal costs. If cults of personality weren’t the most powerful draw to cable news, this would be yet another sure sign that monetizing journalism in the 21st century is a pipe dream. So next time you feel like railing against Bill O’Reilly or Rachel Maddow, head on over to the Fox News online opinion page and check out the alternative– it’s sobering.