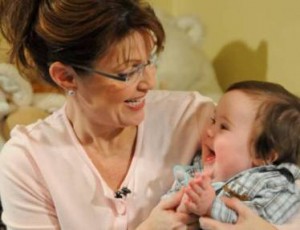 Newsbusters prefaces its story by asking a reasonable question: “What has become of today’s liberalism that makes it acceptable to attack the mentally handicapped if they or their parents are conservatives?”

Wonkette commemorated Trig’s third birthday on Monday by poking fun at a poem that a Palin supporter – “Lynda” – had written in the little boy’s honor:

Oh, little boy what are you dreaming about
Candy canes and mom’s sweet hugs

Oh, sweet baby boy what are you dreaming about
Play cars…trains…planes and a daddy’s strong hands as he lifts you high and makes you laugh…oh, how safe you feel in those hands

Oh, little boy what are dreaming about
Sisters who play with you…and teach you new words

Oh, as you sleep little boy what are you dreaming about
A big bother that carries you on his shoulders…as he shows you the blue sky

Oh, little boy what are you dreaming about
A mother’s soft lullaby…the soft touch of her hand…the soft sound of her voice as she says “I Love You”
Dream on little boy as the Angels stand guard

That strange man yelling unintelligibly at Sarah Palin? He’s merely a lowly shepherd proclaiming the birth of our savior. Today is the day we come together to celebrate the snowbilly grifter’s magical journey from Texas to Alaska to deliver to the America the great gentleman scholar Trig Palin. Is Palin his true mother? Or was Bristol? (And why is it that nobody questions who the father is? Because, either way, Todd definitely did it.) It doesn’t matter. What matters is that we are privileged to live in a time when we can witness the greatest prop in world political history.

The post also encouraged Trig to “Get drunk (on purpose this time)!” and described him as “the smartest one in that family” while also offering a couple of photo collages of the three-year-old, including one featuring an animated stripper. The crux of Wonkette’s post, callous joking aside, seemed to be an annoyance with what the site views as Palin’s tendency to use her son’s disability as a prop or a strategic tool to help win favor and further her political career.

Newsbusters quoted these passages and asked its readers what must have happened so that a post like Wonkette’s could be considered “acceptable political commentary.” Our own Tommy Christopher is rather inclined to agree, Tweeting earlier this afternoon that the Wonkette post is an “Irredeemable Blight,” and that he refuses to link to them in the future.

We’re keen on knowing what you all think, though. Is it ever okay to go after a public figure’s young children, even if that figure has chosen to bring his or her child into the spotlight? Is Newsbusters right to be offended by the post? Was Wonkette’s “birthday greeting” a satirical – if provocative – dig at Palin?

We know how we feel about it, of course. Going after Palin for (arguably) using her son’s condition to her advantage is one thing, but the post wasn’t simply insulting to Palin. (Or to the author of that… rather interesting bit of poetry.) It was insulting to a young child who, while now in the spotlight, never asked to be. So why criticize that which you hate by becoming a part of it?