Koran Burning Coverage: Turns Out Fox News Had It Right 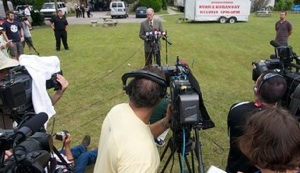 In the last few days the cable newsers (and websites that, ahem, cover cable newsers) have been rather obsessive in their coverage of the “Burn a Koran Day” spectacle planned by Florida Minister Terry Jones. But upon closer examination, not all cable news channels were treated equal, or more accurately, treated it equally. There was one that paid it little attention from the beginning: Fox News.

Now that the media circus has come full circle and Rev. Jones appears to have canceled plans to burn the Koran (or not), many are wondering just how complicit the media has been in elevating a fringe character to the global spotlight. Already the White House has weighed in, pointing out that there is more press covering Rev. Jones’ statements than there are parishioners in his church.

Today, ABC’s Jake Tapper asked President Obama if his administration also played a part in giving too much attention to Rev. Jones (particularly since Defense Secretary Robert Gates reportedly made a personal phone call asking Jones to cease and desist.) Mr. Obama made clear in his response that he held the safety of the U.S. troops stationed in Muslim countries as far more important than worrying about “elevating a fringe character” as Tapper described the situation.

But that’s exactly what’s occured: a fringe character with 50 or so parishioners has somehow developed the power to create an international incident. And many in the media have come to recognize that absurdity. Chris Cuomo of ABC News candidly tweeted out: “I am in the media, but think media gave life to this Florida burning…and that was reckless.” Mediaite founder Dan Abrams also tweeted “The massive media coverage of this whack job pastor is shameful. His “announcement” is being treated like a huge jury verdict.” WaPo’s Howard Kurtz added via Twitter: “Of course Terry Jones says he’s only delaying his Koran-burning; if he cancels it, the media mob bails and he’s left with 50 followers.”

Fox News avoided it altogether, just as they’ve pretty much ignored this story all along. As Mediaite’s Jon Bershad wrote yesterday:

“Thus far the Koran burning story has not been completely absent from the cable channel, with references to it made as recently as this afternoon. However, with the help of our friends at TV Eyes, we can see that they have mentioned it far less than MSNBC, HLN, and CNN. The following chart looks at the time periods between 12 AM on September 5th and 11:59 PM last night:”

Yesterday, as the stakes rose, news outlets began to state their policy on how exactly they’d cover the Koran burning event (before it had been “canceled.”) The AP got the ball rolling when Yahoo’s Michael Calderone reported that AP had announced it will “not distribute images or audio that specifically show Qurans being burned, and will not provide detailed text descriptions of the burning.”

CNN and NBC News (which oversees MSNBC) obliquely told TV Newser’s Alex Weprin that they each were planning to cover the event as the news warranted. Specifically, Weprin reported:

An NBC News spokesperson says: “Our policy is to cover news events as they take place, and report on them with context and perspective. The determination about what images are appropriate and will be broadcast will be made by NBC News management after the event happens.”

A CNN spokesperson says: “We will dedicate resources to the story and provide coverage as news warrants.”

As everyone prepared and talked about how they were going to cover it, FNC was talking about how they weren’t. Fox News’ Michael Clemente told David Zurawik at the Baltimore Sun that Fox News would not be covering the planned burning of the Korans, saying “We do not cover every flag burning that happens in this country. We don’t run every hostage tape.” At the time, Fox News was the first and only cable network to make the claim, which in hindsight, makes them look smarter than the lot.

During yesterday’s press spectacle (in which Jones announced some “deal” with the NY Imam that never actually seemed to exist), both CNN and MSNBC went live to cover it, then scrambled to both make sense of the odd event, as well as check on the veracity of Jones’ account. (recollections of the Balloon Boy were suddenly rampant on Twitter). It was treated as a major news story. Fox News stuck with their own bizarre programming experiment — a Glenn Beck clip show, but at least they avoided the embarrassment of falling for what now looks like a cheap media stunt.

The other way to deal with this was demonstrated on MSNBC’s Morning Joe, where they invited the pastor on, then rather than interview him, had Jon Meacham hector him with Biblical passages.

This is not to say that Fox News’ decision was necessarily a news-gathering one. Some have suggested they provided little coverage to Rev. Jones in an effort to marginalize him as an outlier, not representative of the Southern, conservative Christian base, which appreciates FNC’s coverage. As one media insider claimed, “Fox just doesn’t pound a story of a crazy Preacher. Its not their audience.”

While networks and news operations alike were sending bookers, crews and spending precious resources on a guy who wanted to build a bonfire, Fox News was holding their fire. The bottom line is this: as it became clearer that Mr. Jones was seeking media attention by threatening to perform a petty, vile act, there was one network that did not take the bait.