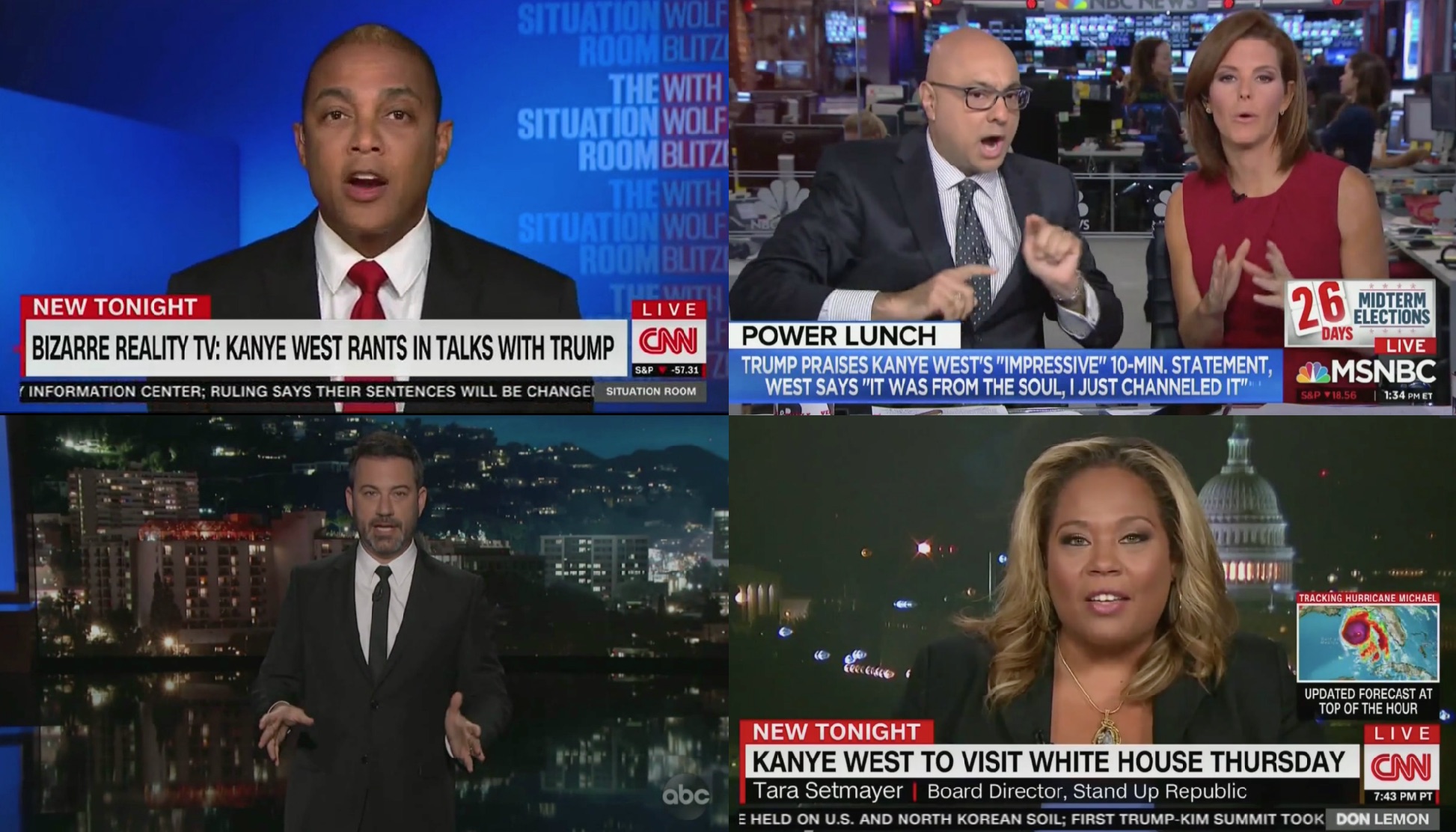 Kanye West rocked the political world with his visit to the White House on Thursday, giving a full throated expression of support for President Donald Trump.

Whether you call it a speech, rant, monologue, or a stunning stream of consciousness, what occurred in the Oval Office was an event we like have never witnessed. It was unscripted, unpredictable, and completely wild. Some points had you laughing while others had you asking, “What on earth is he talking about?”

Kanye West has remained defiant ever since he came out of the pro-Trump closet. Despite the mockery and pressure he faced from his liberal peers in Hollywood, he has fully embraced his inner MAGA.

He was mocked for his recent SNL appearance where he wore the Make America Great Again hat and gave a pro-Trump speech. Cast member Pete Davidson shamed the rapper saying “being mentally ill is not an excuse to act like a jackass” and made the point that Kanye West shouldn’t talk politics, but stick to music.

It wasn’t until it was announced this week, however, that he would attending a luncheon at the White House that many in the media escalated their attacks on him from unfair to absolutely vicious.

On Tuesday, a CNN panel dove into racial tropes. Bakari Sellers said Kanye West is “what happens when negroes don’t read,” which caused Don Lemon to laugh hysterically. Then so-called “conservative” commentator Tara Setmayer said black people were about to “trade” the rapper in a “racial draft” and called him the “token negro of the Trump administration.” And just in case she wasn’t offensive enough, she attacked him over his mental health, saying no one should “take him seriously” since he has “already been hospitalized.”

Then Thursday’s meeting came and all hell broke loose.

MSNBC host Stephanie Ruhle literally called it an “assault on our White House.” CNN’s S.E. Cupps said it was “really sad” seeing a man who is “clearly not okay” an a president “willing to exploit that.” Georgetown professor Michael Eric Dyson went on a tirade, declaring Kanye West a “blitzkrieg of blathering ignorance” and that “we must intervene” on what he diagnosed was “PTSD” from the loss of his mother and accused him of giving “cover” to “white supremacist” Trump. CNN anchor Chris Cuomo labeled the event a “traveshamockery” and argued “there’s something wrong” with Kanye West’s mental health. MSNBC’s Brian Williams referred to the rapper as the “giant shiny object… wearing a red hat.” Jimmy Kimmel mocked the visit, comparing it to a conversation typically held between people wearing hospital bracelets.”

But Don Lemon easily made the most vile attacks on Kanye West. He began by saying he “felt bad” for the rapper, saying what he saw was a “minstrel show” and that he was “embarrassing” African Americans, insisting they were all “cringing” from his display in the Oval Office. He insisted that West needs to “back away from the cameras” and “get off stage” since he “needs help.”

“Kanye’s mother is rolling in her grave,” Lemon said.

What a cruel thing to say. To invoke someone’s dead mother in order to attack them is abhorrent.

It’s remarkable that this chorus of pundits-turned-psychologists who say Kanye West “needs help” apparently all thought he was perfectly fine when he said George W. Bush “doesn’t care about black people” after Hurricane Katrina. It’s only when he donned the MAGA hat and expressed an ounce of support for President Trump that they decide he should be in the loony bin.

Kanye West has always been eccentric. Most artistic geniuses are. Even the most vocal Trump supporters can’t say they understood everything that was said yesterday in the Oval Office. It’s impossible. But at the same time, not everything he said was complete nonsense as the media would leave you to believe. There were nuggets from his 10-minute marathon that were identifiable and relatable like treatment he has gotten from his peers who don’t approve his politics, his comments on police brutality and black-on-black violence, and his advocacy for jobs in America.

The media’s discussion about Kanye West’s mental health isn’t about his well-being. This is about delegitimizing his support for Trump.

Kanye West is an influential figure and one of the only A-listers in Hollywood brave enough to back this president let alone extend an olive branch. So many see this as an ideological threat since the left has such a stronghold on the black community. That’s why you’re seeing these intolerant “token negro” attacks. They want to monopolize their own political ideology by demographics. We see the constant shaming of women, Hispanics, LGBT community for being conservative or supporting the Trump agenda. And this faux concern over his mental health is coming from the same people who for the past six months have chased around Tom Arnold with cameras and microphones during his never-ending quest to find the infamous “pee tape.” None of them question his sanity and he’s arguably just as incoherent.

What’s truly sad about all of this is that the media’s concern-trolling of Kanye West’s mental health only stigmatizes a problem millions of Americans face. Mental illness is a subject our country has failed to meaningfully address and these attacks marginalize the rapper and dismiss him as a mental health patient and not an individual who has his own political views.

Plus, we don’t know what took place behind closed doors. Perhaps there was another productive meeting like his wife Kim Kardashian had alongside Ivanka Trump and Jared Kushner, who Van Jones had recently praised over his criminal justice reform efforts. If Kanye West becomes instrumental in a policy shift from this White House, he ought to be praised and not ridiculed.

Taylor Swift was allowed to weigh in on politics without being scorned or vilified by the mainstream media. Kanye West should be offered the same courtesy. And the fact that he isn’t says more about his critics than himself.