The Morning After: A Look Back at This Crazy Campaign Season’s Most Riveting Chapter Yet 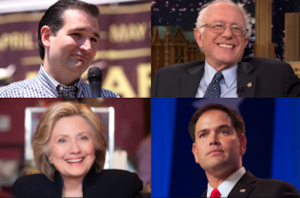 Of all the debates (11) and the hundreds of interviews and speeches, last night’s political theater easily, easily trumped them all.

Perhaps it was a lack of candidate presence spewing the same talking points we’ve heard repeatedly since last spring. Perhaps it was how competitive matters were on both sides throughout the evening. The whole presentation regardless of what channel you were watching was raw, shocking, outlandish, fun and unpredictable… which pretty much sums up this entire campaign season.

Let’s start with outlandish: On the Democratic side, Chuck Todd reported on MSNBC this morning that if adding up all the coin tosses (6) from tied precincts last night, those alone were enough to tip the scales to Hillary Clinton, who somehow overcame impossible odds again to win all six (chances of that happening: 1-in-64). This is the same Hillary who led 73-year-old self-described Democratic Socialist Bernie Sanders — who isn’t even a Democrat and had almost zero name recognition when entering the race — by 41 points in Iowa in May. 41.

But after all the votes were counted, the result is a virtual tie with Clinton edging Sanders on fractions (.2). Note: This was so close, if even a few coin tosses went Bernie’s way, it could be him emerging as the (ever so slight) victor, which is crucial for symbolic reasons. And now this morning, there’s even allegations of voter fraud directed at the Clinton Camp. A relatively civilized Democratic primary has just officially entered the mud.

Next – shocking: Pollster Frank Luntz reports that Donald Trump’s chances of winning the Republican nomination had plummeted (per ElectionBettingOdds.com) 17.2 points to him only having a 25.2 percent of winning. In first place is Iowa bronze medalist Marco Rubio at 53.5 percent, up 24.1 points in the past week alone. As for Ted Cruz — who, you know, actually won relatively easily last night — he stands at having a 13 percent shot of winning the nomination.

But the truly shocking part was the overall GOP result given the record turnout of 182,000. Remember, the consensus going into the evening was higher turnout = more new voters coming onto the scene = Trump victory. Cruz (and Rubio) showed everyone that Trump’s support — actual votes — may be weaker than advertised in polling. As noted here, it’s one thing to say you support a candidate in a poll, it’s something else entirely to actually caucus, actually pull that lever.

There’s only one name that comes to mind when it comes to Trump’s new standing this morning: Mike Tyson (circa February 1990). Quick history lesson: Iron Mike was the undisputed heavyweight champ at the time (when that sort of thing really mattered) and some wondered if anyone could ever match his bravado and brute punching power in the ring. The Sun Tzu saying: “Every battle is won before it is ever fought” never rang more true than with Tyson. Note: Every fighter Tyson faced to that point was clearly already intimidated before entering the ring. But along came Buster Douglas — a 42-1 underdog — who systematically pummeled Tyson before knocking him out in the 10th. I was only a teenager at the time, but it still ranks up there as the most shocking sporting event I’ve ever witnessed on live television.

From that point on, Tyson was no longer Tyson. He lost the invincibility, the intimidation factor. He would never dominate again (losing twice to Evander Holyfield and once to Lennox Lewis when fighting for championships). And that’s Trump, who cites his poll numbers and winning brand in every interview, every speech. But in his first big test in Iowa, he got the huge turnout needed and still got beat. The “I’m a winner” badge has been stripped, and one has to wonder what’s left for him to offer since deep-dive policy speeches aren’t in his DNA.

Runner-up shocking: Ben Carson leaving Iowa to go back home to Florida for a fresh change of clothes. I think it’s now safe to make the following statement: Carson is truly a nice man, an inspiration considering where he’s come from and has saved more lives and done more good than most people on the planet. It was certainly a good run while it lasted. But — for lack of a better term — he’s a weird dude.

So as the night approached 11:00p on the East Coast, things then really got bizarre. Here you had Marco giving a victory speech for finishing third (it’s understood he outperformed better than anyone, but still…), followed by Hillary declaring victory in a completely awkward address — yelling half the time to illustrate energy, or something — when no network had come close to doing so. And when Trump got his turn and basically everyone on the planet thought/hoped/were worried (depending on your opinion) he would implode right then and there, the billionaire contained himself and actually showed class and dignity (which won’t last, but still…). After everyone else was done, Cruz finally did a victory lap, but by that time half the public was already suffering from speech fatigue or was actually asleep.

Batting third: Fun. If you work in the political media business in any capacity, Monday night was a crazy first round of the NCAA Tournament. The drama that unfolded was why you worked for nothing as an intern in a newsroom. It was why you shared an apartment with three other people when trying to climb the ladder through all the chaos. Each act was truly a hoot to witness and absorb. So to that end — and it was impossible to keep up on Twitter last night — here’s the most compelling (for lack of a better word) tweets from 8:00 PM to midnight Monday night:

My takeaway from Iowa: People on TV are really stupid and are compensated highly.

“No one remembers who came in second.” – Walter Hagen

Trump is the leading GOP vote-getter tonight, among natural-born-American candidates.

We deserve 4 years of Trump pic.twitter.com/4pUbswEIlC

HILLARY (through teeth): I’m SO excited to tie with the guy I originally led by 50 points *starts doing the macarena*

We’ve had eight straight months of political reality TV on cable news. Business has been good for all as a result.

But actual reality crashed the party last night. Truth really can be stranger than fiction.

And now it’s off to New Hampshire, where — when it’s all said and done — could make Iowa look like the appetizer.