The New Yorker Arrives Too Late To The ‘Tea Party’
video

The New Yorker Arrives Too Late To The ‘Tea Party’ 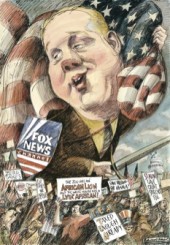 A couple of weeks ago (the equivalent of a lifetime in this month’s news cycle) I noted that “defending and/or warning against the prevalence the Tea Partiers” looked to be the media’s newest “parlor game.” To that end The New Yorker has jumped in to the Tea Party fray with a longish piece by Ben McGrath, which explores “the social movement that helped take Ted Kennedy’s Massachusetts Senate seat away from the Democrats, and may have derailed the President’s chief domestic initiative, occurred last fall.”

The article, a standard New Yorker treatment as these profiles go, goes to some length to explain the movement, describe the players: Rick Santelli is cast as the “Paul Revere figure of this Second American Revolution,” Dick Armey and Glenn Beck are also name-checked a number of times, as are any number of “Party” participants from across the nation. All in all a fair-ish take on a movement that has been dominating media coverage for some months now. But too little, too late?

What the piece does not address (and I imagine this has mostly to do with print deadlines) is Thursday’s Supreme Court ruling that struck down limits on how much corporations can spend on elections. One of the most striking fall outs from this decision (which was roundly critisized on both the left and the right ) is that it ostensibly removes the influence of everyday voters. Said Rachel Maddow the other day: “What’s the point in individual people trying to influence politics with their donations if Exxon or some other company can quite literally match and therefore cancel out the combined donations of every single individual donor in the nation whenever it wants?” Said leading Republican election lawyer Ben Ginsberg: “the political party as we know it is threatened with extinction.”

Know who else is probably “threatened with extinction”? The Tea Partiers. That is unless some corporation decides to take up the Tea Party mantel. Something which thus far has appeared to backfire. (The Founders weren’t too hot on corporations either, by the way) By the midterms we may be more concerned about the “Goldman Sach” effect than that of what’ left of the Tea Partiers.

[Pic above is via The New Yorker]

Related (sort of): What a corporate sponsored Senate might look like courtesy of the people at Funny or Die: