The New Yorker Reads Sarah Palin, Thinks She May Be Of ‘Historic Consequence’ 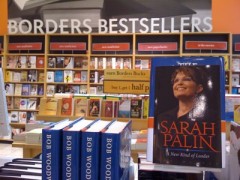 The New Yorker may or may not be atop of Sarah Palin’s reading list (one sort of assumes not) but that hasn’t stopped The New Yorker from reading and reviewing Sarah Palin‘s memoir Going Rogue.

This perhaps shouldn’t come as such a surprise, the magazine has recently been dipping its roguish toes in coverage of the Right’s most headline-making figures — Glenn Beck made an appearance a few weeks back, as did the tea partiers. But still, it has to be a sort of triumph on the part of Sarah Palin, (sneering or otherwise, depending on how you feel about the magazine) that her influence is now such she has warranted a near 4,000 word review — penned by Sam Tanenhaus, no less, who is moonlighting from his regular gig at the The New York Times Book Review, so a double whammy of sorts in the ‘liberal media elite’ category.

What does The New Yorker think of Palin’s Going Rogue ? Much like Newsweek (but without the alarming cover) they peg Palin as the modern-day successor to former conservative populists like Barry Goldwater . Unlike Newsweek, the New Yorker thinks that the very fact she is a woman may make her a populist of “historic consequence.”

Populists, from William Jennings Bryan and Huey Long through Joseph McCarthy and George Wallace, have always been divisive and polarizing. Their job is not to win national elections but to carry the torch and inspire the faithful, and this Palin seems poised to do. That she is the first woman to generate populist fervor on such a scale enhances her appeal—and makes her, potentially, a figure of historic consequence.

Didn’t necessary see that one coming did you? The magazine also notes Palin’s “iron grip” on the daily news cycle, and the “a permanent air of improvisation and experiment” that surrounds her career. Furthermore, they suggest that Barack Obama may have something to do with her popularity: “fascination with Palin owes something to the way that her cultish aura mirrors, or refracts, the aura that surrounds Barack Obama, the other political figure who comfortably inhabits the nexus of politics and celebrity” (also, “the only candidates from outside the Lower 48 ever to grace national tickets”).

But what did they think of the actual book? There’s actually precious little critiquing of the tome in the article; much like Palin has used the book’s publication to give her a renewed platform, the magazine has used it as an excuse to talk about her in a larger context. However they did have this to say:

Whenever “Going Rogue,” which Palin wrote with the help of the Christian journalist Lynn Vincent, leaves the subject of family joys (“Every child is created special, with awesome purpose and amazing potential”), the beauties of the Alaska landscape (“Autumn in Alaska shimmers in white and gold”), or the utility of prayer (“As the months went on, Todd’s prayer was answered by an offer for a permanent position with BP”) and turns to politics, it becomes a narrative of almost continual embattlement. It’s the outsider against the insiders, the innocent circled by wolves, whether in the Alaska Republican Party, in the “professional political caste” that stifled and, finally, betrayed her during the 2008 campaign, or in “the liberal media.” In almost every case, Palin’s own part in these conflicts is scrubbed free of complicating detail, lest it add darkening shadows to her pastel self-depiction.

We’ll have to keep an eye on Palin’s Facebook page to see whether the magazine warrants a reverse review.