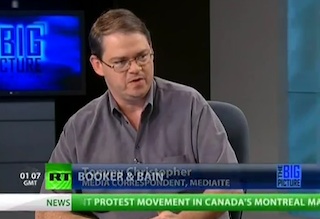 Mediaite’s own Tommy Christopher popped up on The Big Picture with Thom Hartmann yesterday to discuss the controversy surrounding Cory Booker’s instantly critiqued, walked back, and manipulated comments condemning the Obama campaigns attacks on Mitt Romney’s Bain Capital. While Hartmann wanted to begin by discussing the revelation that Booker had accepted thousands of dollars of support from Bain Capital over the years, Christopher argued that he didn’t believe campaign donations factored in Booker’s comments.. However, he decried Democrats like Booker who were complaining about Obama’s Bain attacks since, after all, they’re true.

Hartmann gave a history on the Private Equity business, pointing out that it was very different from venture capitalism and wasn’t in any way the “job creator” work that Romney would like to depict it as. Instead, it’s a way of exploiting a tax loophole that was completely illegal until the Reagan Administration and that the industry was forced to change their name to “Private Equity” after their reputation got so bad. As, Christopher explained, the problem was that, no matter what happens to the companies Bain works with, Bain wins.

That led both men to talk about the weird fact that Romney has been practically invisible to the press for the past week and has been completely unable to create a counter-argument to disprove Obama’s job destroyer allegations. And that, he said, is why Obama needs to keep up with this line of attack. Not only is it working, it’s true.

Watch the video from RT below: