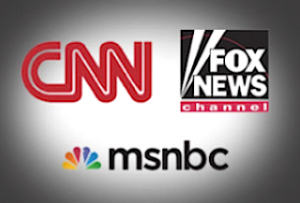 The election has not yet come to a close, but the media’s self-appraisal has already commenced — and much of it isn’t flattering.

The Poynter Institute, a nonprofit journalism school, surveyed 20 leading newspaper editors, media critics, and journalism school professors to assess the coverage of the 2016 campaign. And the grades were spotty. Phil Boas, the editorial page director for the Arizona Reublic, said that there were “lots of A’s through F’s to hand out.”

Jeff Jarvis, a professor at New York’s CUNY Graduate School of Journalism, gave the media a collective grade of D — saying that the horse race coverage got in the way of the issues that mattered.

“The job of journalism is to inform the public,” Jarvis said. “The candidacy of Donald Trump and the quality of political discourse is evidence of our failure. That should be no surprise given that we devote most journalistic resource (sic) to predicting races, not to informing voters.”

Cable news was particularly guilty in this regard, according to the Poynter survey participants. Jay Rosen, a journalism professor at NYU, criticized the cablers for their use of campaign surrogates.

“A special WTF award to the cable networks for their use of Trump surrogates. Aside from disinforming the audience, they were not even reliable guides to what the candidate would say. Donna Brazile feeding questions to the Clinton campaign was also a low point.”

A number of respondents cited the work of David Farenthold of the Washington Post as being particularly strong. (Farenthold has spent months investigating Donald Trump‘s charitable contributions over the past decade. Despite the Trump campaign’s claims that he gave more than $102 million, Farenthold was able to confirm only one donation of less than $10,000.)

But for the most part, shoe-leather reporting like Farenthold’s was in short supply, according to the Poynter panel.

“I would also say that the more sensational stories about both candidates – Trump’s sexual transgressions, Clinton’s emails and her responses to Bill Clinton’s accusers – got excessive coverage compared to the more substantive issues, which were Trump’s business and charity frauds and Clinton’s foundation and her performance in the Senate and as Secretary of State,” said Florida-based reporter William March.

And Emily Ramshaw, editor of the Texas Tribune, said the media failed to understand and connect with everyday people.

“It’s easy to sit in our ivory towers and make ‘educated’ guesses about who the frontrunners are,” Ramshaw said. “It’s another thing entirely to step out of D.C. and New York — to step off of the campaign buses and out of the debate halls — and absorb the frustration and resentment of the underprivileged, the uneducated, in the South, in the Rust Belt, in the American heartland.”

Check out the complete survey responses here, via Poynter.org.